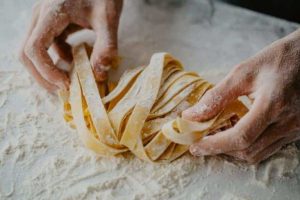 What’s the opposite of the term al dente?

The term al dente references how well done a pasta has been or should be cooked. Al dente is generally a bit harder and a little undercooked. The opposite of al dente would be soft, overdone, and a little mushy.

Now that we have covered the general difference keep reading to learn more about what al dente means and how to cook pasta al dente antonym.

Cooking Pasta Opposite of Al Dente

The term al dente means “to the tooth” and references the pasta’s texture after cooking. Generally, how the pasta feels against the tooth is categorized as being al dente, perfectly cooked, and overcooked. Overcooked pasta, the opposite of al dente, is very soft and mushy.

For most, overcooking pasta happens by accident. Not many go in with intentions of eating mushy noodles. If you are making the noodles for a baby, you may want to overcook them. Here is how to overcook noodles:

Another tip to help you avoid getting mushy noodles is to cook the same noodles in the pot when cooking. Mixing different shapes and styles of noodles could result in some being overcooked and some being undercooked.

If you have accidentally overcooked your pasta, do not throw it away. There are different ways you can use the mushy pasta that will still taste great. One option includes sauteing the noodles in a pan with butter or olive oil and adding garlic and parmesan cheese. Another recipe alternative for overcooked pasta is to turn the noodles into noodle pancakes. To make, mix a whisked egg with the noodles and form pancakes— fry pancakes on a flat griddle with butter or olive oil.

Another overcooked noodle fix is to soak the noodles in cold water and ice to prevent any further cooking of the pasta and remove any slimy starch residue left behind from overcooking. Once drained, you can mask the mushy texture with a decadent sauce and fresh vegetables, such as peppers and zucchini.

Cooking noodles al dente means they are just a bit harder than perfectly cooked pasta. To cook pasta al dente, bring a large pot full of water to a boil and add pasta. Cook for about eight to ten minutes, checking often to ensure the pasta is not too undercooked and crunchy or overcooked and mushy. Once pasta is ready, drain and rinse with cold water to stop the cooking process. Though some do like their noodles al dente, preparing noodles is perfect for dishes where the noodles get cooked twice. For example, al dente pasta is ideal for making some baked pasta meals.

Cooking Pasta in a Slow Cooker