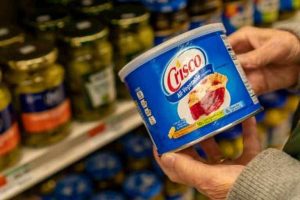 Baked goods often use Crisco in their recipes, but if you don’t have or don’t want to use Crisco, what can you substitute? Because Crisco is a shortening that is solid at room temperature, the best substitutes for Crisco are other types of solid fats. You can substitute butter, margarine, lard, or coconut oil for Crisco.

For those who don’t like the taste of Crisco or who have health concerns about it, this guide will reveal the best substitutes.

What are the best substitutions for Crisco?

Crisco is a brand name for a vegetable-based shortening that is solid at room temperature. Crisco, like all shortenings, is 100% fat. Because there are no other ingredients, besides fat, in Crisco, it creates flaky and crispy baked goods, such as cookies and pie crusts. When considering substitutions, you need to look for another solid fat with a similar texture and flavor.

Lard: Although cooking with lard isn’t as popular as it once was, it is probably the best substitute for Crisco or shortening. Lard is virtually tasteless pork fat that provides flaky textures that are similar to baking with shortening. You can also replace Crisco with lard when frying foods because lard has a high smoke point. Lard contains monounsaturated fats, which makes it a slightly healthier substitute for Crisco.

Butter: Butter is an easy substitute for Crisco because you probably already have it in your refrigerator, and it has a rich flavor. Though the flavor of butter is deeper than Crisco, many bakers prefer the taste of this substitute. However, butter has more water content than shortening. You can’t tell the difference in cakes and bread recipes, but pie crusts will be less flakey. Because of the difference in water content, use one cup and two tablespoons of butter for each cup of Crisco the recipe requires. Another way to overcome the difference in water content is to make ghee or clarified butter. Because clarifying butter removes the water content, it creates a texture closer to Crisco in baked goods.

Margarine: Like butter, margarine can also be used in place of Crisco or shortening in equal amounts. Margarine will provide textures in food that are very similar to Crisco, and the flavor will be milder than butter.

Coconut oil: Baking and cooking with coconut oil has become trendy in the past few years because it has some health benefits. Since coconut oil is a solid form of fat, you can use it as a substitute for Crisco with a one-to-one ratio. While you will get similar textures to cooking with shortening, coconut oil has a distinctive flavor that you are sure to notice. Unless you wish to add a tropical flavor to your food, you may want to opt for another substitute.

Can I substitute bacon grease for Crisco?

Bacon fat is a form of lard and can substitute for shortening. While you can purchase bacon grease, many people collect it when cooking bacon. Whether bought or collected, bacon grease does have a strong bacon flavor and smell, which means it probably isn’t a good shortening substitute in sweet recipes, like pie crusts, cakes, or cookies. But, it can be a tasty replacement in biscuits, bread, and other savory recipes. It is also important to remember that most bacon is salted, which will carry over to the bacon grease. When replacing Crisco or shortening with bacon grease, be sure to reduce the amount of salt in the recipe. Bacon grease also makes a good replacement for shortening when frying foods.

Can I substitute olive oil for Crisco?

Olive oil is a popular ingredient, thanks to its versatility in the kitchen, and many people wish to use it as a substitute for Crisco. In some cases, this will work well, and in other situations, you may be better off with a different ingredient. If you are seeing a substitute for frying in shortening, olive oil may be your answer. Olive oil isn’t often used for deep frying because it is much more expensive than Crisco or shortening. However, olive oil is delicious when searing or shallow frying foods, such as eggs. Be aware that olive oil smokes at a lower temperature than shortening, so be sure to use the exhaust fan above your stove.

What is a healthy substitute for Crisco?

Many people have concerns surrounding the nutritional content of Crisco. The original, all-vegetable version of Crisco has 100 calories and 12 grams of fat per 1 tablespoon serving. Though there is no trans fat in some versions of Crisco, there may be healthier alternatives. Both lard and coconut oil have some nutritional advantages over shortening. Another, less obvious, substitution for shortening in baked goods is apple sauce. There will be a noticeable difference in flavor, but opting for unsweetened applesauce minimizes the taste difference and maximizes the health benefits. There will also be a chewier and less flakey texture. To create a texture closer to the original recipe, swap out the Crisco at a one-to-one ratio and then add one tablespoon of butter per cup of shortening in the original recipe.

Can I substitute shortening for butter?

Substitutions generally go both ways, so if you run out of butter but have a can of Crisco, you are in luck. When cooking and baking, you can use Crisco in a recipe that calls for butter, with a bit of a difference in flavor. However, if the recipe calls for salted butter, you should add ¼ teaspoon of salt per cup of Crisco.