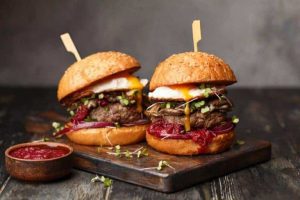 How to keep hamburgers warm in a slow cooker? Here’s your answer:

Sometimes you need to make lots of hamburgers and keep them warm, especially when hosting family gatherings or barbecues. Placing cooked hamburgers in a slow cooker is one way to help keep them moist and warm for hours allowing guests to eat when they are hungry and relieves the cook from standing in the kitchen or over a grill the entire time. Here is the easiest way to keep hamburgers warm in a slow cooker:

Another option to keep hamburgers warm and moist is to put the hamburgers in a small, oven-safe dish or bowl and set it in the slow cooker. Pour water around the dish, but not inside the dish where the hamburgers are. Set heat level to warm and cover. The steam from the water will keep the hamburgers moist without submerging them in water and possibly waterlogging the meat.

If possible, avoid using low or high heat settings on the slow cooker, overcooking the hamburgers, or drying them out. Some older slow cookers do not have a keep warm option. If your slow cooker does not have a warm setting, it is best not to use it to keep hamburgers warm. Instead, consider placing burgers in a pan with water or beef broth and set them on the grill. Keep it away from the flame but close enough to keep the pan and the hamburgers warm.

Cooking Hamburgers in a Slow Cooker

There are many concerns with leaving food out after cooking. If left out too long, it not only runs the risk of attracting flies, there is also a risk of the food spoiling. Hamburgers can be kept in the slow cooker for several hours without any problems. How long hamburgers can be left on a platter varies with the temperature. If the burgers are in an air-conditioned room, they will last up to two hours when left out. If outside on a warm day, they may only last an hour or so. Check burgers by smelling them and if they smell a little off, discard them immediately.

It is possible to freeze cooked hamburgers. Before doing so, ensure the meat is still safe and would be something you would consume—seal leftover hamburgers in heavy-duty freezer bags. If desired, separate patties with a small piece of wax paper in between each one. Force out as much air as possible before sealing and then place in the freezer. Cooked hamburgers can remain in the freezer for up to four months before losing quality. Before reheating the frozen hamburger patties, check to ensure the patties are not freezer burned or discolored. If they are, discard and buy some fresh ground beef to make burgers. It is also a good idea to allow patties to thaw completely before attempting to reheat.

Reheating Hamburgers in a Slow Cooker