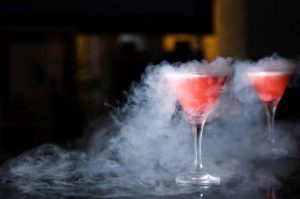 Typically, you wouldn’t assume that something as cold as liquid nitrogen would be useful for food preparation. Still, it is quickly becoming the secret ingredient for many dishes. But because of its unique properties, you can’t exactly pick up liquid nitrogen at the grocery store. Fortunately, with a few phone calls, you can likely find some relatively easily. The best places to buy liquid nitrogen for cooking or other uses are welding supply stores, industrial gas companies like Praxair, or a tire mechanic.

Buying the nitrogen itself isn’t the hard part, though – it’s storing it. You will need something called a dewar, a double-walled vacuum flask, to regulate the mixture so that it doesn’t evaporate too quickly. Overall, liquid nitrogen is a relatively complicated product, so you want to be sure that you have all the right tools at your disposal. We’ll go over the dos and don’ts of using liquid nitrogen, as well as how to buy it for your needs.

Where Can I Buy Liquid Nitrogen for Cooking?

Although liquid nitrogen isn’t readily available “over the counter,” you can find it in many places. Here is a quick breakdown of the locations where it might be available and what to do when purchasing it.

If all else fails, you can ask someone who uses liquid nitrogen. Don’t know anyone? Fortunately, the material is trending on YouTube, as many vloggers have started to use the substance for mind-bending videos. So, simply look one up and send them a message. In most cases, you’ll get a reply and a link, which can point you in the right direction.

Tools/Materials Needed to Use Liquid Nitrogen

As we mentioned, you will need a dewar to store and use your liquid nitrogen. Fortunately, you can find these online, although they are not exactly cheap. The purpose of a dewar is to allow the gas to evaporate and release into the air. One thing to keep in mind is that you NEVER want to put liquid nitrogen into a sealed container. If you do this, it will explode as the liquid evaporates. Even storing it for a short period could be dangerous, so don’t do it.

We highly recommend purchasing your dewar before sourcing your nitrogen so that you can transport it effectively. Also, keep in mind that the liquid will evaporate no matter what, so you want to use it as quickly as possible. Once exposed to the air, it will start turning into a gas – this is the fog effect you see when looking at it. So, if you’re not ready to use your nitrogen, don’t buy it until you are.

Some other tools you should have on hand for handling and safety include:

How is Liquid Nitrogen Used for Cooking?

If you have never used this stuff before, plan to have some fun with it before you start mastering your technique. Since the substance can freeze virtually everything, it’s quite a novelty. Once you’re finished playing with it, here are some ways to use liquid nitrogen for cooking:

There are plenty of recipes out there for you to try, so start experimenting! Just be sure to follow safety precautions, and you’ll be the star of the show!

Where Do You Get Liquid Nitrogen?