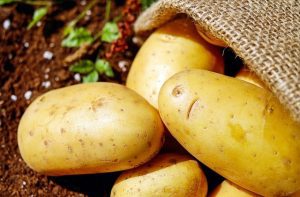 Do you often come across recipes that don’t tell “potato numbers“? It can be genuinely frustrating for people who don’t know how to calculate the weight. And that’s where we can help you!

So, how many potatoes in a pound? Two to three medium-sized potatoes (all types) make a pound. So far, the number of potatoes in a pound entirely depends upon their sizes. Sometimes, it takes only 1-2 large potatoes to reach the 1 pound scale. Similarly, 8-10 small-sized white potatoes equals 1 pound.

So, before you decide the numbers of potatoes in a pound, figure out which potato type and size you are using!

There are seven types of potatoes, including Petite, Red, Russet, Fingerling, Purple/Blue, Yellow, and White. Among these, there are 5000 varieties and 200 different wild species and subspecies.

Here are seven known potato types and their best uses:

Petite are bite-size potatoes having several names such as baby, marble-size, and pearl. Their skin and flesh color is light-brown and has an intense flavor.

Red potatoes have small-medium size, and round appearance. Their thin skin is red, and their flesh is white. The texture is smooth and moist. And there is a nice sweetness in flavor.

Known as Idaho in the United States, russets are a family of potatoes sharing russet-colored, netted skin. They have a medium-large, oval appearance with white or pale-yellow flesh. Russets have a fluffy texture with a mild flavor.

They are two-four inches long, finger-shaped potatoes. Their skin colors include purple, orange, white, and red. In contrast, the colors of the inner flesh include yellow, purple, white, red-orange. Fingerlings have a waxy texture with a buttery flavor.

These are small-medium, oblong potatoes. Their skin has a purple or blue hue, and flesh has several colors, including pink, purple-lavender, blue, and white. Their texture is moist and firm with a butter-like nutty flavor.

They are marble-large, round potatoes with tan-golden skin and yellow-golden flesh. Yellow potatoes have a velvety texture with a subtle-sweet, buttery flavor.

White potatoes are small-medium sized potatoes with a long, round appearance. Their skin and flesh are white/tan.

For your comfort, here are some types of potatoes in pounds.

How Many Red Potatoes In A Pound Or lb?

Around 7-9 small-sized, red-skinned potatoes make a pound. Red potatoes are readily available year-round, and you can find them in your nearby groceries.

If you can’t find red potatoes, then try their substitutes. These include white or yellow potatoes, Yukon Gold potatoes, and russets.

Keep in mind not to use russets if the recipe calls for boiling red potatoes.

How Many Yukon Gold Potatoes In A Pound?

However, if your recipe requires Yukon but you can’t find them, better switch to other potato substitutes.The best substitutes for Yukon potatoes include red skin potatoes and white potatoes.

Never use russet potatoes in a recipe calling for Yukon Gold. That’s because russets have a starchy texture, and their shape may distort during boiling.

How Many Russet Potatoes In A Pound?

However, if you aren’t aware of the sizes, then hold two potatoes in your hands. If they fit comfortably in your palm, they are medium. If you don’t feel comfortable, then they are large potatoes.

And likewise, if you feel too comfortable, then they are smaller.

2 cups mashed russets (or any other potato-type) makes a pound. Three and a half cups of chopped potatoes equal 1 pound.

How Many Large Potatoes In A Pound?

However, it is best if you use medium-sized potatoes of any type in a recipe. Their taste is fresh and far more delicate than small or large potatoes.

Although large potatoes are pretty good in terms of nutrition, they may have sprouted. So, the best option is to avoid them.

How Many Potatoes In 5 Pounds?

As it depends on the potato size, eight small-sized potatoes should make a pound.

Likewise, 16 medium-sized potatoes should fit in a 5-pound bag. However, you still need to check for yourself whether you’re buying precisely 5 pounds of potatoes or not.

In the absence of both above options, train your eyes since our eyes are the kitchen’s best measuring tools.

What Potatoes Are Best For Mashing And Boiling?

Here are our favorite potato types for mashing and boiling:

Yukon Gold potatoes are indeed the best for mashing. Not only this, they would do just as good when roasted.

It’s because these gold potatoes have a nice dense flesh that makes them stand out from other potato types.

They have a lower glycemic index than russets. So, diabetic patients and those watching their calorie intake can consume gold potatoes with no worry.

Additional benefits include Vitamins B-6 and C, protein, and a healthy dose of potassium. Minerals like potassium boost good heart and muscle function. So these potatoes play a more nutritive role in diet for heart patients.

High-starch potatoes are best for boiling. Potatoes like Yukon Gold and Yellow Finn have a medium starch level.

That means they contain more moisture and hence would not fall apart when boiling.

You may also use russets for boiling. But because of their fluffy texture, they absorb more water. So maybe after scalding, their shape is not what you are hoping.

Which Potatoes Are Healthiest?

When considering nutrition, all potatoes are good for health. They contain a moderate amount of vitamins, minerals, carbohydrates, fiber, and calories.

However, potatoes with dark flesh such as Yukon Gold, Purple Viking, and Ruby Crescent are the healthiest.

Why Are Small Potatoes More Expensive?

Small potatoes are more expensive than other sizes. It’s because these potatoes are heirloom cultivated. And it may also be a waste to add them to your potato salad.

So better go for medium-sized potatoes. They are cost-effective, more delicious, and you can use them for several purposes.

You may also use fingerling potatoes for a healthy alternative. They have low starch and you can eat them with small qualities.

What Does A Pink Potato Mean?

Sometimes, you may have noticed small pink pockets inside your potato, these are Phenols.

Phenols are acidic chemical compounds that form inside a potato through a chemical reaction.

The chemical reaction happens when certain enzymes and phenol react with oxygen coming from outside. And as a result, you get a pink potato.

Is A Pink Potato Safe To Eat?

These potatoes are completely safe to eat. You can even add vinegar in soaking water to avoid discoloration. Once you cook them, they will look and taste just fine.

However, always and always avoid green potatoes. There may be fungal growing inside them which is hazardous.

How many potatoes Should You Get From One 1 kg or 2 lbs Seed Bag?

How long should you boil potatoes?

What is the best all-purpose potato?

Why is my potato slimy?

Erwinia is a bacterium that may attack the potato during harvesting and grading and hence invading the tuber. Potatoes may have certain wounds or damages which cause the bacterial attack.

When should you throw out potatoes?

You shouldn’t eat any cooked potato that is 4 days older. If you found any mold on potatoes, better throw them out. Various mold colors include brown, black, red, bluish-gray.

What are the most versatile potatoes?

Yukon Gold potato, Red Gold potato, and Kennebec are by far the most versatile potatoes out there. They give the best results in boiling, roasting, mashing, and frying without issue.