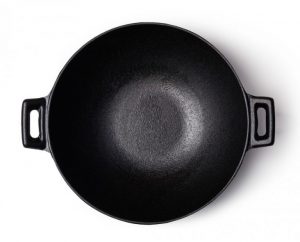 When it comes to cooking, a wok is versatile, handy, and works for many different dishes. When choosing a wok, you must decide: cast iron or carbon steel? This guide will break down the difference so you can make an informed decision.

Although both cast iron and carbon steel are well known for being durable and reliable, they have unique strengths and weaknesses. As a rule, cast iron cookware will last forever but require more maintenance and care. Carbon steel is easy to master, but it will wear down faster than cast iron.

Depending on the kind of cooking you plan on doing, having one metal may be better than the other. Let’s dive into the primary differences between cast iron and carbon steel.

If you’re unfamiliar with cast iron, you may not be aware that the metal is supposed to be seasoned regularly. Depending on how often you cook, you may need to season your wok annually or every other year. The process of seasoning cast iron works by infusing a layer of carbonized oil into the metal.

Because cast iron is porous, the oil penetrates the metal quickly and will stay there for a long time. The advantage of having an oil-infused wok is that it will be naturally nonstick. So, when cooking with a cast iron wok, you should never need to use nonstick spray.

The disadvantage of cast iron’s porous surface is that other materials can seep into it as well. One of the first rules of cast iron maintenance is that you’re never supposed to wash it with soap and water since the soap can get into the metal and then leach into your food. The other reason not to scrub with soap is that it can rub off the seasoning layer, which will remove the iron’s nonstick properties.

By comparison, carbon steel is much easier to maintain. Since this metal is not porous, you never have to worry about seasoning it or scrubbing it too hard. Since carbon steel is thinner and less durable than cast iron, it will break down faster. If cast iron woks last for generations, carbon steel versions will last about a decade or two, depending on its construction.

Since there is such a difference in thickness and weight between cast iron and carbon steel, the two metals will cook food differently. Due to its thickness, it can take longer for cast iron to heat up; but it will distribute that heat much more evenly because it is so thick. By comparison, carbon steel woks heat up quickly, but they tend to retain the most heat at the bottom since it is closest to the burner.

As a rule, dishes cooked in a wok are quickly prepared, which is why so many Chinese chefs use carbon steel. In a restaurant setting, waiting for a cast iron wok to heat up can take too long. If you plan on using your wok for meals that require longer cook times, a cast iron version is likely better since it will heat everything more evenly.

Another point to consider with these metals is that cast iron doesn’t do well with acidic foods like tomatoes or citrus. The reason for this is that the acid can break down the seasoning, forcing you to re-season your wok more frequently. So, if you like cooking with these foods, carbon steel is a better option.

Cleaning and Storing Your Wok

As we’ve already discussed, cast iron cookware requires a bit more diligence when it comes to maintenance. However, while seasoning your wok annually can be a chore, it does make everyday cleaning far easier and less stressful.

In most cases, cast iron can be cleaned much faster than carbon steel. First, because the metal is nonstick, you don’t have to worry about food particles getting attached to the sides. Usually, you can simply wipe everything off in one or two passes. The second reason why cast iron is easier to clean is that you don’t have to worry about soaking or scrubbing it with soap. Instead, all you must do is use a sponge or scrub brush (nothing too rough), and you’ll finish in a couple of minutes.

By comparison, carbon steel woks can lose their nonstick coatings over time, which will make them harder to clean. Sometimes, you may have to work hard to remove any stuck-on pieces. Also, the harder you scrub your steel, the faster the coating will wear off.

When it comes to storing your wok, keep in mind that cast iron is much heavier. So, depending on the size of wok you get, you may struggle to lift it. If you have plenty of storage space and don’t need to move the wok too far, cast iron won’t be much of an issue. However, if you need to put it on a high shelf or cupboard, it will give you a bit of a workout.

Although cast iron is heavier and feels more substantial, the material itself is abundant and easy to shape. Because of this, cast iron woks are generally going to be cheaper. You can find high-quality models within the $20 to $50 price range, although there are plenty of high-end versions that can cost triple digits.

By comparison, carbon steel uses a more complex construction process, so these woks will start at around $50 and go up from there. You can find cheaper versions, but they will not last as long, so it might not be worth the cost savings.

Here are some frequently asked questions about cast iron and carbon steel woks to help you make a more informed decision.

Is carbon steel safe for cooking?

Yes, this material does not contain any toxic chemicals, so it is perfectly safe for cooking. However, some models may come with a nonstick coating that can wear off and potentially leach into your food. Be sure to check whether a wok comes with a nonstick layer before buying.

How often do I need to season my cast iron wok?

As a rule, you should season all your cast iron cookware annually. However, if you use your wok more frequently (i.e., daily or more than four times a week), you will want to season it every six months or so.

Can I put my wok in the oven?

Both cast iron and carbon steel woks are durable enough to use in the oven. However, they may not fit well because of their size and depth, especially if you plan to use a lid. If your wok has wooden handles, it will not work in the oven.

Do I need a lid for my wok?

Most woks will come with a lid. Typically, though, cooking with a wok does not require a cover since it is designed for fast food preparation like stir fry, fried rice, and pan-seared noodles.

Both materials are highly durable and will last decades if cared for properly. Although cast iron is heavier and seems more rugged, it has more carbon, making it susceptible to breakage. If you accidentally dropped your cast iron wok, it could crack.

Now that you know more about carbon steel vs. cast iron woks, you can make the right choice for your cooking needs. Bon appetite!