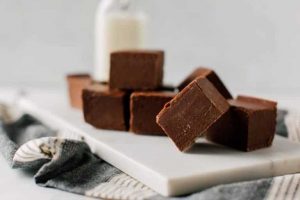 Fudge sets based on the ratio of components and the temperature — if anything is wrong you could end up with a goopy mess.

What do you do if your fudge doesn’t set? It depends on why it didn’t set. Sometimes you can salvage the fudge by changing the ingredients or by changing the temperature. Otherwise, you may need to use your fudge in a different recipe altogether.

Regardless, don’t throw it away! There’s still a lot that you can do with fudge, even if it isn’t setting up properly.

Most fudge is cooked by heating it to a specific temperature, mixing all the ingredients just right, and then allowing it to cool. Once it cools, it is beaten so that it will harden — this is an essential step for old-fashioned fudge that isn’t there in modern fudge. There are modern fudge recipes that take a lot of guesswork out (some even use the microwave). But most old-fashioned fudge recipes are going to require that you get everything correct for it to set.

Of course, there are other alternatives; you might have added too much milk, for instance, which will end up with either a softer or runnier product. This is a common mistake if you’re trying to convert a recipe or use different units of measurement.

What Should You Do If Your Fudge Didn’t Set?

First, scrape all the fudge back into your pot. Add water until the mixture is runny again, usually about a cup and a half, but it depends on the recipe that you’re using. Let the fudge completely dissolve within the water on medium heat before bringing it up to a boil.

Bring the fudge back to boiling temperature (212 F). Cook at the temperature specified at the recipe again and then take it off the heat. Repeat the steps of cooling the fudge and then beating it until it has lost its sheen.

Once the material is no longer shiny, you can pour it into a pan and see if it sets up. Let it cool completely to room temperature before placing it in a refrigerator.

If it still doesn’t set, then there may be another issue, and you might need to reuse it instead. You can reuse fudge for many things: chocolate sauce for ice cream, icing for cakes and cupcakes, or a drizzle for cookies and other pastry desserts. Fudge that doesn’t set is essentially a chocolate sauce or a thick pudding.

What Are Some Recipes You Can Use Your Fudge For?

If your fudge failed to set, there are a few other uses for it. Your fudge is useful in recipes that call for melted chocolate.

First, you could make brownies with your failed fudge; the fact that it didn’t set properly shouldn’t interfere. Instead, you’ll get rich, thick chocolate brownies.

You can also make molten lava cake with fudge that didn’t set properly because the fudge should still melt inside of the cake; of course, if it’s very runny that could be a challenge.

Fudge can be used in pudding cakes, regular cakes, and cupcakes, replacing melted chocolate directly. Keep in mind that unless your fudge is very dark, the recipes will come out sweeter, especially if they request semi-sweet or dark chocolate or baking chocolate.

Other things you can use fudge for include truffles (the interior filling, though you may need to freeze it first) or chocolate fruits (you can use it for fondue and dip fruit into it).

How Can You Avoid Fudge Not Setting?

Recipes that include marshmallows or condensed milk will almost always set up; it’s very hard to botch these recipes. Marshmallows provide a natural thickening agent, as does the condensed milk; if you put it in the refrigerator, it will thicken up regardless.

So, if you’re having a hard time trying to get your old-fashioned fudge to set, you might just want to try a different recipe.

You can use these “modern” fudge recipes like any other fudge recipe, including mix-ins, flavoring, and other flourishes — they just have a different base. They’re also slightly less challenging, which means you’re less likely to experience grainy textures or other mishaps.