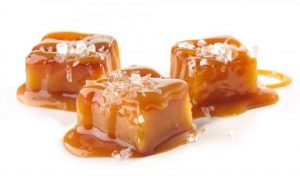 Is there a difference between carmel and caramel? Carmel is a proper noun used for people and places such as Carmel, California, or Mount Carmel in the Middle East. Caramel is a cooking term that refers to: (1) a coloring and flavoring agent or (2) a firm, chewy candy made with sugar, cream, corn syrup, and butter. When Carmel appears in cooking-related texts, it is a misspelling of caramel.

Carmel appears in ancient religious texts as the name of places or religious orders. Its history has no connection with cooking. So, how did an archaic proper noun become part of the cooking vocabulary?

How is Caramel Pronounced?

Of the English-speaking countries, North America — specifically the United States — is the only place where the spelling of carmel and caramel is confusing. By tracing dialectic changes across the United States, it appears that the pronunciation of caramel is shortened from three syllables to two as one moves from East to West.

As more speakers dropped the middle syllable in caramel, the world became pronounced carmel. Eventually, people began to spell the word according to its pronunciation, turning caramel into carmel. However, that doesn’t mean there’s consensus on its pronunciation.

Much like the pronunciation of tomato or potato is debated, so is the correct way to pronounce caramel. Some places pronounce the first syllable as car; others as care. For those that include a second syllable, it may be an “uh” or an “ah” sound. How the final syllable is pronounced depends on whether it is a three- or two-syllable word. Its pronunciation can range from uhl, ehl, ul or el. Since there’s no agreement on pronunciation, it may be best to go with your region’s dominant pronunciation.

Some believe caramel is an American candy, while others contend that a hardened form of caramel existed in Middle Eastern cultures as early as 1000 CE. But everyone agrees that the first commercialization of chewy caramel occurred in the late 1800s. Hershey’s candy empire did not begin with chocolate. It started with caramels. Milton Hershey’s first candy company was called the Lancaster Caramel Company, which he sold in 1900 to the American Caramel Company for an unbelievable $1 million — $33 million in today’s dollars. Interestingly, Hershey’s obsession with chocolate began as he worked on finding a candy coating for his caramels.

How is Caramel Made?

If you think caramels are a light brown, soft, chewy candy, think again. Caramels have different flavors, textures, and colorings. It all depends on how the caramelized sugar base is made.

1. There are two ways to caramelize sugar.

Caramelized sugar can be created in the microwave, but it’s only good for home use.

2. Caramels have different flavors and textures. Almost any flavor can be added to caramels — maple, chocolate, vanilla. Different textures come from how high the temperature is and how long the sugar is cooked.

4. Caramels can be hard or soft. Hard caramels are slightly softer than hard candy. They are often used as toppings or in sauces. Soft caramels usually contain sweetened condensed milk and corn syrup, which contributes to the chewier texture.

Two well-known sites have Carmel in their name — Mt. Carmel and Carmel-by-the-Sea.

Mt. Carmel is the first use of the world. It appears in ancient texts such as the Bible and Egyptian records of the 16th century BCE. Because it was viewed as a sacred site, the word Carmel appears in monastery names, religious schools, and holy orders. The Carmel mountain range is in Israel and is part of a nature reserve.

Carmel-by-the-Sea is located on the Monterey Peninsula in California. It is named after the Spanish Mission that was built in 1797. The mission was created to help the Native Americans in the region as the Spanish began to occupy California. The Carmel Mission is one of the authentically restored Spanish Missions. Religious services are still held at the mission. The city of Carmel enjoys a significant tourist business because of the Mission. Although the site is called the Carmel Mission, it is not affiliated with the Carmelite order of the Roman Catholic Church.