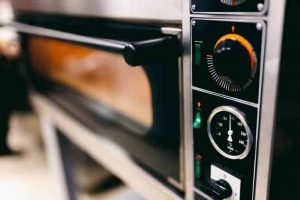 If you love baking, you’ve probably noticed that many of your favorite recipes call for setting the convection oven temperature to 180 Fan. But if you’re a beginner, you may not understand what that means.

A fan oven is similar to an electric oven with an additional fan at the back. Its purpose is to spread the heat more evenly inside the oven. When you’re baking in a fan oven, the temperature must be set to a little lower than an oven with no fan. You’ll often see the temperature guidelines like 180C/fan 160C.

In the United States, we call “fan ovens” convection ovens — distinctive ones with a circulating fan to blast your food with hot air. The Gas setting is an old method used to describe the number to switch the valve on an old natural gas oven. So, how can you tell if your oven temperature is accurate?

In this guide, we’ll reveal the conversion table so you don’t end up with a tray of treats that are burnt to a crisp.

Fahrenheit to Celcius (F to C)

How to Calibrate Your Oven

An easy and accurate way to ensure that your fan oven is set to the correct temperature is using a thermometer. Over time, your convection oven’s temperature dial can become unreliable and inaccurate. It may not reflect the right time, so you’ll end up with undercooked or burnt meals. If you don’t have an oven thermometer, you can use the popular sugar method.

You must be wondering:

What has sugar got to do with calibrating ovens? Let’s find out!

Science suggests that you can calibrate ovens using the melting point of sugar, which is about 366 Fahrenheit. This allows us to determine how hot/cold the oven is without using a thermometer. If you keep a half-tablespoon of sugar in a pre-heating oven at 375℉, and your sugar does not melt, the oven runs cold. Likewise, if you place the sugar in a 350℉ oven, and it starts melting, your oven runs hot.

So, to test for a hot oven, start below the melting point. Like this:

2. Add about 1/2 tablespoon of sugar to an oven-safe dish.

Protip:  Avoid the perils of melted-sugar clean-up, and pour the sugar onto aluminum foil.

3. Put the sugar into the hot oven and set the timer for about 15 minutes.

4. When the time’s up, check the sugar. If it melted, the oven is hot. If it didn’t melt, start the process again. Raise the oven heat to 360 degrees F and so on.

This time, if your sugar doesn’t melt (but becomes a little discolored), then your oven runs cold.

If you discover that the table sugar melts as the temperature reaches, 360℉, you understand that your oven is off by 6℉. In other words, when the oven dial reads 360℉, you know the temperature inside is actually 366℉.

Baking is a very delicate process. While the cooking time, ingredients and preparation are a few of the things that can affect the final product, the most critical thing is the oven itself. For bakers or beginners who want to improve their culinary skills, a fan-forced oven is an investment you should look into.

Modern-day ovens aren’t confined to one type of heating method. If you have a superior quality oven, it likely offers different cooking functions. Most common ovens are convection ovens, which means they use a forced fan to speed up cooking. You can divide convection ovens by the number of cooking functions they provide, and where all the fans and their heating elements are.

A fan-forced oven has a fan at the back to distribute heat evenly. The heating element around the fan stabilizes the temperature inside the oven. It heats every level or tray inside the gas chamber equally.

In most ovens, the fan symbol is represented by the picture of a spinning fan. Fan forced ovens are electric and can be as small as counter-top oven or as large as commercial ovens used in bakeshops.

So, why should you choose a fan-forced oven? Here’s how they stand compared to other commercial ovens:

A fan-forced oven can seem a little daunting if you’ve never used one before. However, as long as you remember these, you should have an easy and fun time cooking with it.

Can I skip preheating my oven?

You should never skip this step. Time is a valuable commodity for everyone, and we’re all guilty of skipping the crucial preheating step every now and then.

All of the chemical reactions that happen before the oven reach 350 F need to happen before the baking time, and some — like the expansion of air within your dough — have to be kick-started by a blast of heat. That only happens when you put the dish into an oven that’s preheated at 350, and it doesn’t happen with a less-than-hot oven.

Putting your cookies or brownies in an oven that’s not at 350 is going to result in dry, hard, cookies that spread flat instead of rise. It also changes the texture of anything you’re baking. If you notice that your second tray of brownies comes out better baked than your first, you might be overlooking this critical step!

In theory, you can bake everything at 350 and call it a night. It is less to remember, but 350 isn’t as optimal a heating temperature for everything you may think.

For instance, take puff pastries. If you bake them at 400 degrees, they’ll rise much higher because of the hot steam that builds up between the layers. Bread can also benefit from higher temperatures, sometimes even over 425 degrees. That’s because it makes the loaf rise faster, while the crust remains malleable. Muffins baked at higher temperatures also rise up more and have a shiny muffin top. Let’s not forget cookies, but that depends on how you like them. If you want your cookies more crunchy on the outside and soft on the inside, then raise temperature to 375 degrees.

Changing the baking temperature will also change how your baked goods turn out, so if your bread, cookies, or muffins seem like they’re a little less than perfect, use the same general principles to determine how you can adjust the temperature and get what you want.

How do I know if I own a fan oven?

You don’t need to turn the oven upside-down to find out if it’s fan-equipped. You should be able to find a little fan symbol inside a circle on the outside. It can be a fan assisted oven or a three-pronged fan inside a circle.

Circulated air can transfer heat faster than still air, which makes the fan ovens more energy efficient. Moreover, given how fan ovens circulate the heat with the incredible exhaust system, they also remove excess moisture within the oven as you bake.

Can I put a fan in my conventional oven?

You can turn your oven into a convection oven with a dish placement. Convection ovens cook food faster than conventional ovens. What makes a convection oven unique is a small fan installed in the back of the unit that blows whenever the oven uses to blast hot air more evenly throughout the oven.