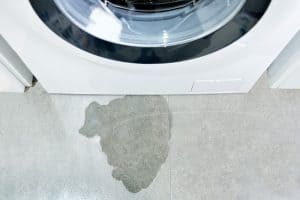 You’ve just walked into your laundry room to put the next load in the washer only to find the last load has left a soapy, watery mess all over the floor.

This mess happens from time to time, but you’re not sure why it does. One sure thing is you want to know why it is happening and how to fix it. So here you go:

Washing machine drains overflow for two reasons, clogged drains, or drainpipes that are too small in diameter to handle the volume of water needed. Most often, it’s due to clogging, and the best solution is to clean the drainpipe using a snake or an enzymatic cleaner and then install a lint catcher. A more permanent fix would be to install a laundry sink or a larger diameter drain pipe.

So how effective are these solutions? And which one is the best for you?

Keep reading to find your answer!

Why Is My Washing Machine Drain Overflowing?

Before you can fix it, you need to know why the drainpipe is overflowing in the first place. Diagnosing the problem is relatively simple, and there are only a few reasons for the drain to overflow:

When water exits the washing machine drain hose, so does all the dirt, lint, grime, and soap-scum. Over time, this excess waste starts to accumulate inside the drainpipe, causing it to slow down the flow of water, and one day eventually clog. Kind of like the way plaque builds up on your teeth over time if you do not regularly brush them.

When your drain pipe becomes clogged, water isn’t able to pass through easily, causing backpressure. Eventually, the water overflows from the inlet of the drain pipe. Clogged or blocked drain pipes aren’t entirely avoidable, but there are steps you can take to reduce the chances of it ever happening again.

Ways To Stop Your Washing Machine Drain From Overflowing

1. Getting help from a plumber

If you’re hesitant about trying your hand at the plumbing, you might be better off calling a plumber to do the job for you. A plumber will usually come and clean the drain and remove any kind of blockage that’s causing the overflow.

However, plumbers can be expensive even for basic fixes compared to DIY, though they produce the same results. And, if you opt for a more permanent fix like installing a larger diameter drain, a plumbers hourly rate can add up quickly.

Lint catchers are a great hack for reducing the frequency of overflows. Because lint is a significant contributor to clogs, placing a lint catcher allows you to stop excess lint in its tracks before it clogs your drain pipe.

Lint catchers install at the end of the drain hose attached to your washing leading to the drain pipe. There are various types, including fabric mesh, metal mesh, and for the ultimate in DIY tech, pantyhose. Choose whichever one you like, but remember you will still need to clean them now and then to keep your washing machine working properly.

Using a drain snake is a great way to remove an existing clog manually. A drain snake is a long flexible wire that snakes through your drainpipe, eliminating clogs. Drain snakes are quite easy to find and are very useful in removing excess grime in your drain pipes.

You insert the drain snake inside of your washing machine drain pipe until you feel a little resistance. Then, you twist the drain snake while slightly pushing and pulling it to make sure that any residue inside the pipe comes off.

Because a lint catcher is usually not enough to stop drain pipes from clogging as soap residue still gets past it, cleaning the drainpipe with a drain snake from time to time reduces the chances of encountering an overflow.

If you don’t want to get your hands dirty with a drain snake, you could try a more convenient and less labor-intensive method, which is enzyme cleaners. Instead of you manually removing the gunk from the drainpipe, enzyme cleaners breakdown the residue causing the clog.

With an enzyme cleaner, you pour the solution down the drainpipe and let it set. It will eventually dissolve the residue clogging your drainpipe. Enzyme cleaners can reach deep into the drain, which is an advantage over drain snakes. Using them just once a month combined with a lint catcher is an excellent combination to keep your drainpipe working efficiently!

A laundry sink provides multiple benefits apart from preventing drain overflowing. You can easily place a lint catcher at the end of the drain hose from the washing machine as well. More so, a laundry sink can be of great use when hand washing small items like shoes, and stains from clothes.

If you’re able to install the laundry sink yourself, you will be able to save quite a bit of money by eliminating the plumber’s hourly service rate.

Older washing machines use a lot of water compared to newer models. When these large volumes of water flow with pressure into the drain pipes, they often cause overflows.

Buying a high-efficiency washer not only helps to prevent overflows but can also save gallons of waters, which we all should strive to do. Although He machines cost more, they are an excellent investment in conserving both money and water in the long run.

3. Replacing the drain pipe with a better one

Another fix would be to replace the drainpipe altogether. Sometimes, older houses have narrower pipes that simply cannot handle the larger volume of water displaced from modern washing machines.

If you think you need to replace your drainpipe, your best bet would be to first consult with a plumber. They will be able to determine whether your drain pipes are the problem or not. If they are, the replacement will also require getting behind walls, which may be beyond many DIYers.

So you’re probably better off having this renovation task done by a professional plumber. Although it might be a little expensive, it will be a long term fix to the overflowing problem.

How to unclog a washing machine drain pipe?

An excellent DIY method to unclog your washing machine drain pipe is to pour a mixture of boiling water mixed with soda through it. Make sure to detach the drain hose, and then pour the solution until the pipe becomes unclogged.

A washing machine drain may get clogged over time when excess waste like lint, soap, and dirt build up inside the drain pipe.

How far can you extend the drain hose down the drainpipe?

Ideally, you should not push down more than 6” of the drain hose from the washing machine into a standpipe.

How do you remove a drain hose from a washing machine?

To remove the drain hose, remove the clamp securing it to the back of the washing machine with either a screwdriver or by pressing the tabs together.