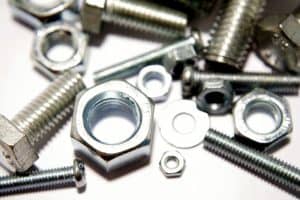 Washers are a ubiquitous and essential part of the nut-bolt-washer trio of fasteners used to assemble just about anything used in our world.

Despite being so common, there is often confusion about just where washers go. Do they go on the nut side, or the bolt side, or both? The simple answer is that it depends on the situation.

If you’ve found yourself in the situation, here’s is what we have:

If you’re working with just one washer, it will generally go on the nut side because the nut has less surface area contacting the workpiece than the bolt side. However, the placement of the washer still depends on how you use the nut and bolt. For instance, if your project requires you to turn the bolt, it makes more sense to use the washer on the bolt side.

Generally, users prefer putting it on the nut side, and as you dig deeper into this article, you will learn why. So without further ado, let’s get on and learn more about washers.

The Purpose of Washers with Fasteners

This multi-purpose disc-shaped item of hardware is often used in conjunction with screws, nuts, bolts, and other threaded fasteners. Before a fastener is allowed to contact a surface, there’s usually a washer there to stop it. So what is the purpose of the washer?

The primary purpose of washers is to help with the load distribution. Washers are great at evenly dividing the load across the fastener with which they’re being used. Fasteners, such as screws, often stress material or objects they are affixed to. For example, placing a screw into the wood may cause the wood to crack on the surface. Using washers can reduce this risk by distributing the load of the threaded fastener across the material surface.

It is also important to note here that not all materials are prone to damage and may not require washers. But washers work wonders with load distribution for wood and other fragile materials and prevent damage against stress.

Some types of washers may also offer protection against the ingress of liquids. These washers are often used in water connections and pipes to establish a waterproof seal. These liquid-sealing washers are designed with a softer material to mold and adjust against the surface for completely sealing the object.

The vibration damping or isolating washers can help absorb vibration and are often used to fasten two objects together. These are made of a softer material like rubber, plastic, or urethane for effectively absorbing vibrations as compared to hard materials. The vibration damping washers are used on the side where the object is vibrating more aggressively to prevent damage.

Also, here’s a great video if you want to learn all about washers:

Common Types of Washers and Their Effective Use

There are different types of washers available to serve various purposes. All in all, washers can make threaded fasteners longer lasting. By distributing the pressure, a washer can prevent the object from damage and the fastener from corroding or moving.

To understand the application of different types of washers better, we have covered the most common ones here for you:

These are the most common type of washer and are used in regular architectural work around the house. Also called plain washers, their purpose is to evenly distribute the load of the fastener while reducing friction and heat between the fastener and the object while tightening them up.

Flat washers are also frequently used as spacers and are typical for a variety of domestic and industrial applications, and are also used for providing electrical insulation.

Popularly used with aerospace, automotive, and household appliances, these fasteners are highly effective in reducing the fasteners’ tendency to loosen up due to vibration or torque. There are many types of lock washers, but they all fulfill the same purpose of holding the nut and bolt in place.

Lock washers are specially designed to bite into the bolt and nut for better grip. No wonder they’re such a hit in transportation industries. They are also frequently found in washing machines.

This one’s another variation commonly found in automotive and aerospace industries. Their purpose is to provide an axial load to fasteners to limit movement caused by thermal expansion or vibration.

Spring washers are commonly used in landing gear and flight controls in airplanes.

Shoulder washers are a popular choice for various electronics applications. These are often used as a bushing for insulating shafts or fasteners within electronic equipment. These washers are designed with non-conductive materials, including nylon. These are not the best washers for humid environments.

Learn more about the types of washers and their applications in this video:

Do All Nuts Require Washers?

In fact, no nut or threaded fasteners necessitates using a washer, but they are used for the variety of benefits they offer. Washers make fastening easier and much safer with load distribution. They fulfill various other purposes, too, as mentioned earlier, for which they’re a prevalent choice for assembling with nuts and bolts.

Should a Washer Go On The Nut Side or the Bolt Side?

Back to our main question!

To help you gain a better idea of where exactly to place a washer, here are some common usages to help you decide.

The key is to understand the role the fastener is playing and use your judgment as to how the washer will deliver better results in keeping everything in place, protecting the workpiece, and distributing the load. Answer these questions, and you will place your washers on the correct side.

1. What happens if you don’t use a washer with nut and bolt?

It is not necessary to use a washer with nut and bolt. However, they are an excellent addition to protect the surface from damage as they evenly distribute the pressure of the installation and keep the fasteners from corroding. Not using washers can significantly impact the durability of the product.

2. Are washers important to use in bolted joints?

Durable bolted joints require steel-made washers to prevent the damage of pre-load caused by brinelling after the application of torque. Washers also play a role in preventing galvanic corrosion, mainly because they insulate steel screws from aluminum surfaces.

3. Do I need washers for screws as well?

Washers are a great addition to any type of installation involving threaded fasteners, including screws. And while not all objects require using washers, they can avoid surface damage by distributing the load of the threat fastener.