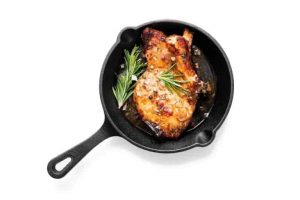 If you’ve been exploring the world of French Cuisine, then you’ll likely come across the Poele cooking technique. Poele is a French cooking technique that uses a small amount of liquid to steam the food, followed by dry cooking or braising to obtain a fried texture and a brown color.

“Poeler is a technique of cooking that is especially used on poultry parts that have skin left on as well as with meat that still has remaining skin. Other protein-rich meat from a butcher, such as veal, can be cooked with this method. It has been compared to steam frying, using a heavy skillet. Small amounts of liquid are added to prevent the food from sticking.”

You can think of this cooking method and terminology as another way of saying “butter pan roasting” because that is what you will be doing. A poelen is a type of French casserole dish made from earthenware, the sides of the pan are short, and it will typically feature a pouring lip to remove the steaming liquid before frying.

Today, the term poele describes a frying pan with a cover to cook various meals, including casseroles and Poele. Poeleing is not only a cooking technique but a way to make the food juicy and aromatic.

Poele is a great way to explore French cuisine because the Poele cooking technique is not very difficult. If you’ve ever seared or braised, then roasted a chuck steak or chicken, then you’ve got a great start on Poele cooking. The best way to explain Poele cooking is to deconstruct a simple Poele recipe curated from Food and Wine magazine.

In addition to the buttered roasting of the chicken parts, a classic herb mixture is associated with the poeleing culinary definition called a Matignon. Matignon is simply a mixture of very aromatic spices and herbs like a mire pox (a mixture of sautéed chopped vegetables like garlic, onions, peppers, and celery). So, let’s start with the Matignon ingredients and prep.

Your raw Matignon is a mixture of ham and aromatics, including onion, carrot, and celery. Salt and pepper are added to suit the cook’s taste. This mixture is sautéed with melted butter, then deglazed with Madeira or another wine.

The trussed chicken is then placed breast side down in the Matignon mixture, covered, and steam-cooked in a hot oven for about an hour. This is the steaming process with liquid and is the first part of the poele cooking technique.

It is important to continually baste the meat with the pan’s rendered juices, which makes for the most flavorful and moist chicken.

It is easiest to develop a nice brown crust in the same pan while in the oven. Only the temperature needs to be turned up 15 degrees higher, and the chicken or other meat is uncovered. There should be no liquid in the pan at this time, only the steamed chicken. Continue in the oven for 30 minutes or until the desired brownness is achieved on the surface of the chicken.

Some people may opt to pan fry or the chicken parts on top of the stove to quickly achieve a brown, lightly crusted skin. It is important, however, not to overcook the meat at this point. You are only trying to achieve golden-brown skin.

Since 2010, the Travel Channel series Food Wars hosted by Camille Ford has brought unique culinary adventures to viewers. It is on this show that Poele cooking gained traction in the US. It began with a battle between Chef Souma Yukihira and Che Satoshi Isshiki. To make the challenge more significant, they decided to forgo a meat protein and use fish instead.

When these two restaurant rivals completed their signature Poele dishes, loyal fans cheered and went online to learn more about this cooking method. The obscure cooking technique of poeleing was advanced, and since that time, it has impacted culinary chefs and home cooks in the US and abroad.

It is exciting to note that modern Poele doesn’t have to feature meat. The poele cooling technique can be used on root vegetables like turnips, parsnips, beets, carrots, potatoes, and fennel. You will still steam your vegetables in a Matignon, but this time you can do everything on top of the stove. After the vegetables are done, remove any remaining liquid and braise the veggies in a small amount of butter and Madiera.

Root vegetables are often steamed or boiled, which leave them lifeless and dull tasting. Today, many people will roast their root vegetables in a very hot oven to caramelize them, bringing out each vegetable’s complex flavors. Poeleling your vegetables is a compromise between steaming and roasting. It is a great way to serve root vegetables that will still have a deep and rich flavor.

It doesn’t matter if you’ butter roast’ or poele fish, chicken, beef, or vegetables. The result is still an awesome and easy French-inspired dish!