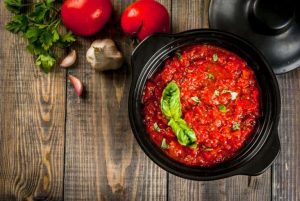 Marinara sauce is an authentic part of Italian-American cuisine. It’s not the same as you’d find in Italy, but inspired by a tomato-based sauce made to garnish seafood. The name “marinara” comes from “mariners” and describes how fishermen often use the sauce on their freshly-made fish.

So, what’s the difference?

In this guide, we explore different factors associated with each sauce. You’ll also discover ideas on how to choose the right sauce for your recipe.

Marinara VS Spaghetti – The Four Differences

American Bolognese-style spaghetti sauce is quite similar to marinara sauce. However, there are some differences in texture, flavor, and prep time. Here are some of the differences you’ll notice:

Bolognese pasta and bolognese spaghetti sauce is richer and has a meaty flavor. The flavors in this sauce are well-combined, and the consistency is thick. On the other hand, Marinara sauce delivers the complex flavors of the different ingredients. It’s less meaty, and you can make out individual flavors easily. Therefore, Spaghetti sauce is ideal for creating strong flavors in a dish, and marinara is more of an accent. Moreover, Spaghetti sauce goes well with plain pasta. If you’re using seafood in your pasta dish, consider using the marinara sauce to enhance the seafood flavors.

Spaghetti sauce is thicker, while marinara sauce has a thinner texture. If you want to make a hearty, filling dish, choose spaghetti sauce or a marinara with a thicker consistency. However, if you want a lighter meal with a thin sauce, marinara is better.

These differences apply to canned, jarred, and homemade sauces. Here are additional factors you may want to consider when you make the sauces yourself:

The ingredients for both sauces are very similar. The key difference is that the spaghetti sauce requires meat. If you don’t have any meat but have all other ingredients, making marinara sauce will save you a trip to the store.

Spaghetti sauce requires one cooked meat. It must also simmer longer to develop the desired consistency. Moreover, it requires more ingredients than marinara and also takes longer to make. If prep time is your concern, choose a marinara sauce.

What Is Marinara Sauce Used For?

Marinara sauce has tomatoes, herbs, garlic, and onions. Like most sauces, there are some variations. In some regions, sour ingredients (like olives, wine, or capers) are added to make tangy marinara. Traditional Italian-style marinara sauce is thin, while many Americanized variations are bold and thick.

While you can add different ingredients to marinara sauce and maintain its originality, you should never add meat, anchovies, or cheese. When you start adding these ingredients, you end up creating Bolognese or spaghetti sauce. Here are some of the classic dishes you can use Marinara sauce with:

Should You Use Spaghetti Sauce or Marinara Sauce for Your Pasta?

Some folks are keen to assume that there’s no such thing as a “spaghetti sauce.” You can serve spaghetti with a huge range of sauces, from Alfredo sauce to Bolognese and marinara to a drizzle of olive oil. They also believe that spaghetti and meatballs aren’t an Italian dish, but American. Besides that, some people even claim Italians prefer eating spaghetti carbonara over some tomato-based meat sauce.

Most of these assumptions are incorrect. However, when you hear ‘spaghetti sauce,’ you immediately visualize and think of a thick, savory tomato-based sauce combined with meat. Therefore, we don’t have to discard this label out of the pursuit of correctness; we can use it to describe an American version of Bolognese sauce. For example, it’s called pasta gravy, pasta condiment, and pasta dressing.

The primary difference between marinara sauce and American Bolognese is the inclusion of meat. Marinara sauce has a small number of vegan ingredients. However, if you start serving marinara sauce with ground beef, or another type of meat, you achieve something with a different flavor profile that adds richness to your dishes.

Can I Use Marinara Sauce For Spaghetti?

Yes! Spaghetti is served with marinara sauce. If you’re after pasta with protein, you’ll want to serve meat or seafood on the side. You can add some meatballs, shrimps, and sausage to your pasta. However, many people prefer the subtle, delicate flavor of marinara sauce on their dishes with no meat to overpower it.

How Does Spaghetti Carbonara Factor Into This?

Spaghetti carbonara is a popular Italian dish that doesn’t use any tomato-based sauce. Instead, the sauce is mixed straight on the pasta with eggs, bacon, and cheese. It’s a different dish but quite simple to make. If you haven’t tried this dish, you should give it a try!

Can You Substitute Spaghetti Sauce for Marinara Sauce?

Another difference with pizza sauce is that it contains balsamic vinegar; unique vinegar made using grapes popular in many traditional Italian dishes. On the other hand, tomato sauce is thick, rich, and has complex ingredients.

Originating in France, tomato sauce requires plenty of ingredients and takes patience. Traditionally, tomato sauce includes a roux of flour and butter mixed with salt, onion, pork or bacon, and carrots. As these flavors combine, you add fresh tomatoes, garlic, bay leaves, and chicken or veal stock. Then, you have to leave the tomato sauce to simmer for hours.

During this time, it will thicken up and enhance the flavors. It also gets sweeter than marinara or pizza sauce once the tomatoes break down. You can also add Italian sausage or ground beef to give it depth in flavor and texture.

Due to its thickness and flavor, traditional tomato sauce is best used as gravy to smother dishes like spaghetti or to make chicken cacciatore, not as a pizza sauce.

Can I use marinara sauce on spaghetti?

You can use marinara sauce on spaghetti, or add some meat for added richness.

Can I use tomato sauce in place of marinara?

If you like the thick and strong flavor of tomato sauce, then you can go for it. Otherwise, the zesty flavor and thin texture of marinara are favorable.

The old-world style Ragu sauce features a blend of onions and extra virgin olive oil for a traditional marinara sauce.

Hopefully, this culinary guide answers all of your questions about the difference between marinara, spaghetti, and tomato sauce. You can use marinara in a variety of ways as it is thinner than tomato sauce. On the other hand, spaghetti sauce is thicker and best used for smothering dishes, like pasta and even biscuits.

You can make tasty and unique dishes with both of these sauces. Now that you know the big differences between marinara sauce and spaghetti sauce, you can choose between the two sauces to suit your cooking style. You can modify recipes and create amazing dishes that turn out just the way you like them!