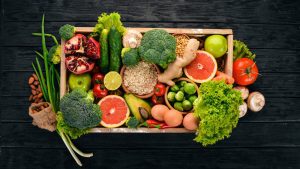 There are thousands of fruits in the world—many of which you have probably never even heard of. There are fleshy fruits like peaches, soft fruits like bananas, and even hard fruits like nuts.

We know that fruit is good for you, jam-packed with vitamins and minerals, and we could be missing out on a ton of great options purely from a lack of knowledge.

Today, we hope to alleviate that lack of knowledge by sorting through the fruits that start with the letter H.

The huckleberry is a general term for plant variations that bear black, red, or blue berries. Huckleberry plants fall into two categories: Gaylussacia and Vaccinium.

Huckleberries are very small and have a tart flavor. They are often used in jams, candy, and baking and make perfect meals for wild animals such as bears, birds, and deer.

The holly azara plant is a shrubby tree that grows between 15 and 20 feet tall. It yields flowers in the spring and buds small, light lavender fruit during the summer.

While the fruit itself isn’t popular among the everyday person, it is presumably edible. However, birds enjoy this fruit the most as they are small and easy to obtain.

The honey locust is a deciduous tree commonly found in the central U.S. This tree is known for its sweet, sticky pulp, but it also sprouts fruit used in feeding livestock.

The honey locust fruit is flat and leathery with a slightly hairy pod. It can be red, green, purple, or even black with a twisted pendulum shape.

The Hala fruit is a plant native to South Asia and thrives in tropical and subtropical climates. It is a sweet-tasting fruit that grows green and turns yellow with time. At just 30 centimeters long, it’s not a particularly large fruit, but it does come with several health benefits.

The honeydew fruit is sweet and juicy, much like its fellow melons: cantaloupe and watermelon. Honeydew is larger than other fruits, measuring as long as nine inches.

The Hazelnut is part of the nut family but is also considered the fruit of the hazel tree—which can also be grown as a shrub.

Hazelnuts are very common as snacks, desserts, and flavors due to their sweet, nutty taste. They’ve also become widely popular in the form of a spread as a healthy alternative to peanut butter.

The highbush blueberry is the most common type of blueberry. It’s likely the kind you get when you purchase a carton at the grocery store.

These berries grow throughout the country, but they’re native to the eastern coast of North America. And you sure can’t beat their tart yet sweet taste.

The hairless rambutan is a small, red fruit that resembles a raspberry. These fruits grow in bunches and are very sweet and juicy, making them favorites among the natives of Malaysia—where they are grown.

Honeysuckles are flowering, climbing plants that are very common in temperate climates. These plants have a lovely fragrance, and their flowers contain sweet honey.

Certain types of honeysuckles also have red berries that are safe to eat. These sweet treats are known to have lots of health benefits, too.

The Himalayan ambarella is a large green fruit that closely resembles the appearance of an avocado. It is believed to hail originally from Eastern Himalayas but is also grown in Brazil.

The Himalayan Ambarella has soft, white flesh with an acidic flavor and tons of vitamin C.

As its name suggests, the hardy kiwi is a close relative of the fuzzy kiwi. However, the hardy kiwi has smooth and edible skin that you can eat like an apple and is about the size of a large grape.

Horse mangoes are large fruits. Their most robust produce measures about 14 centimeters. They have smooth, thick skin and yellow-orange flesh that’s juicy and slightly sour.

Horse mangos are tropical fruits with lots of fiber, but the sticky sap can irritate your skin.

Husk tomatoes, also called ground cherries, have a name appropriate to the way they grow. This fruit, which tastes similar to pineapple with hints of a traditional tomato flavor, grows similarly to corn in husks.

While the husks are toxic and inedible, the tomatoes are tasty and good for eating once ripe.

The Hyuganatsu is a Japanese citrus fruit that looks exceedingly similar to a lemon. This fruit, also known as the new summer orange, is very sour. As such, they are frequently eaten with the pith, which isn’t sour. The flavor of this fruit has hints of sweet, sour, citrus, and honey.

The Hottentot fig goes by many other names: ice plant, highway ice, sour fig, pigface, cape fig—the list goes on. But this fruit is succulent with fleshy leaves and yellow or pink flowers.

The fruit from this plant is edible and turns yellow and fragrant when ripe. It has a sour taste, but it can also be dried or used to make jam or syrup.

One of our more common foods on our list of H fruits, the Honeycrisp, is a variety of apple developed in Minnesota. This fruit also goes by the name honeycrunch, though the former title is much more familiar.

This apple has a sweet-tart taste and a crisp, juicy bite. It also happens to be the state fruit of Minnesota.

The Herbert River Cherry tree is a fairly short tree that rarely grows higher than 25 feet tall. It sprouts very rich, dark red cherries both in small and large bunches that ripen quickly.

This tree is native to Australia, and the fruits are great for eating, juicing, and making jelly.

Horned melons are super easy to spot, as this exotic African fruit sports thick, orange skin. What’s even more unique about this fruit is its small, spiny spots called horns.

On the inside, you can find a juicy, lime-green material loaded with edible seeds. The inside boasts a mild, sweet flavor similar to a cucumber.

Hawthorn berries are tiny red berries that look similar to cranberries. They grow on both trees and shrubs on stems like cherries.

These berries, which have been used as herbal remedies in traditional Chinese medicine for years, pack a tart and tangy taste with a hint of sweetness.

You may also see them in yellow or even black colors.

At number 20 on our H list of fruits, we have a type of berry with a very misleading name. The highbush cranberry is not even a cranberry at all. It’s a part of the honeysuckle family, which we’ve already discussed.

This berry looks and tastes very similar to a cranberry, though, and it’s also found in North America. Unlike the true cranberry, which grows on low bushes, the highbush cranberry sprouts from a taller shrub.

Hackberries are grown on the hackberry tree, a deciduous tree native to dense, warm climates such as southern Europe, eastern Asia, and Central and North America.

The fruit is a very small type of berry that resembles a purple grape. The sweet berry is edible (and very healthy) for humans, but it’s mostly enjoyed in large quantities by birds.

The huito plant hails from the rainforests of South America, the Caribbean Islands, and Mexico. It grows as a tall tree with dense leaves and large, oval-shaped berries.

The fruit features thin, yellow-brown skin with soft, yellow-brown pulp on the inside. The pulp itself has a musky smell and an acidic flavor, making it not so desirable. However, the juice is used as a coloring ingredient, and the fruit is edible if it’s overly ripe.

The hog plum is a very common fruit found in Florida and Central and South America, the Caribbean, Mexico, and some parts of Africa. This plant is technically a shrub, though some rare plants grow to 35 feet tall.

The hog plum fruit is small, round, and bright yellow. It is eaten both raw and cooked, with flavors ranging from bitter to sweet depending on how ripe they are. It’s used to make juice, jam, jelly, and even beer.

First found in the Himalayan Mountains of China, the Himalayan mulberry tree ranges from small to medium. The fruits are yellow-white and can be anywhere from 6 to 12 centimeters long.

Like other types of mulberries, this fruit is good to eat with a nice, sweet flavor. Additionally, the juice from the bark is used to treat wounds.