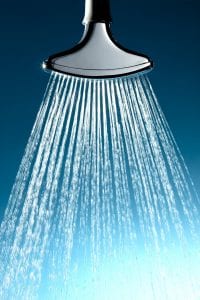 High-pressure showers can be extremely satisfying – but are often wasteful. And if your standard shower head has the pressure of a firehose battling a three-alarm fire, you may wonder

Why does my bathroom shower have too much water pressure?

If the water pressure is higher in the mainline, the pressure at the fixture will also be higher. The EPA requires all shower heads to have a flow restrictor that limits water pressure to between 50 and 80 psi. High shower pressure could mean that the shower doesn’t have a restrictor, or that the restrictor isn’t working.

Most showers heads let you control the flow and pressure. If that doesn’t work anymore, you may have a problem with the restrictor. Excessive pressure in the pipe can be the culprit behind a broken restrictor, not to mention the other problems that high pressure can cause over time.

Water Pressure in Your Home

Water pressure in homes depends on many factors. The height of the water tank or reservoir in relation to the height of the building can make a difference. The size of the main pipe and the number of homes connected to one main also affects the pressure in each dwelling.

Old and clogged pipes often reduce the water pressure in many areas, but in many places, elevation, pipe diameter, and the height of the tank cause higher pressure.

Typically, your plumbing system, including pipes and fixtures, is designed for pressure between 40 to 60 pounds per square inch. Pressure below 30 may be too low, and pressure higher than 80 psi can damage the entire plumbing system.

Because of this, most area codes require the installation of a pressure regulating valve to keep water pressure somewhere between 40 to 60 psi. These valves also protect your plumbing against sudden surges of high pressure.

Water Pressure in the Shower

Since water pressure in your home shouldn’t be more than 80 psi, that’s what most fixtures are built to endure. The output pressure, however, is a different story. Regardless of feed pressure, shower heads are required to deliver no more than 2.5 gallons per minute at 50 psi.

For water conservation, the flow rate is more important than pressure. Modern shower heads are designed to limit the flow rate to 2.5 GPM or less while still delivering a satisfying pressure. Instead of using more water, they use air to create an output pressure of around 50 to 60 psi.

If you’re accustomed to these shower heads, an increase in pressure will not go unnoticed. Water pressure higher than 80 psi might even be highly uncomfortable.

A sudden increase in your shower pressure means that the restrictor is either broken or stuck. The problem is quite common as these restrictors can wear out over time. The good news is that you can easily replace or repair a broken flow restrictor.

Shower head manufacturers are required to install a flow restrictor to limit the flow to a maximum of 2.5 GPM. Low-flow shower heads bring this down even further to 1.5 GPM. These shower heads also regulate pressure, but their job is to give you higher pressure at a lower flow rate. When the flow restrictor breaks, the pressure naturally increases due to an increase in flow.

A flow restrictor is a plastic disc beneath a washer in the shower head. These things are susceptible to wear and tear over time. Fortunately, replacing these washers is easy to do.

Here is a step-by-step guide:

In case the disc is just misaligned, you can simply adjust it back. You can use either a narrow plier or a paper clip to pry the washer and the disc out.

The process might differ slightly for different brands and models, but this works for most known brands out there.

If the shower head doesn’t have any disc or washer, that means it is an old head not in compliance with the current codes. The sudden increase in pressure could be due to a rise in pressure in the mainline, or due to a faulty pressure regulator valve.

What Does My Bathroom Shower Has Low Pressure?

If anything, lower pressure in the shower is more common than high pressure. However, it may or may not have the same reasons. The buildup in the pipes or shower head is a common culprit, but it could be an issue with your main water line as well. Clean the shower head and remove the flow restrictor to see if that resolves the problem.

If the pressure is low in all the fixtures, you might consider contacting the local authorities responsible for water supply in your area.

Increased water pressure isn’t something you should take lightly. If the pressure is higher than usual, there may be an underlying issue that needs immediate attention.

Whether it’s a faulty flow restrictor or higher water pressure in your home, you need to resolve these underlying issues not only to preserve water but also to save your pipes and fixtures from damage.

What is the difference between water flow rate and water pressure?

Water flow is the amount of water coming out of your shower head measured in gallons per minute. Water pressure is the intensity with which the water comes out of the head.

What are the risks of higher water pressure in shower?

Why can’t I control water pressure in my bathroom shower?

Typically, bathroom showers have valves that let you control the pressure by turning them counter-clockwise. If you can’t control the shower pressure that way, there may be a fault in the valves.

Can I remove my shower head flow restrictor?

Yes, shower head flow restrictor is merely a plastic disc inside the shower head. While manufacturers are required to have these discs installed in their products, you can remove them to improve water pressure.