If you have a leaking or a broken showerhead, it’s time to fix the problem. 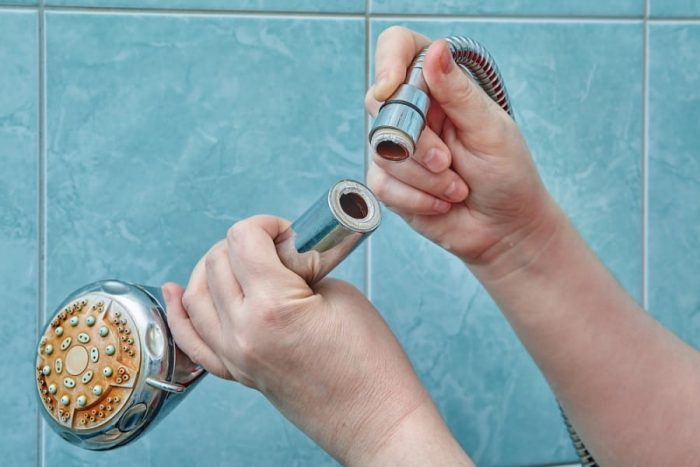 So how to fix a broken showerhead?

So without further ado, let’s learn how you can fix this issue.

Is the Shower Head Really Broken

Before you are ready to jump to the conclusion, it is important to know for sure if the shower head is broken.

The leakage in the shower head can occur for various reasons. To proceed with the right solution, the first step is to detect the problem. Here’s what you can do:

Where is the water leaking from? This is your first clue about the cause and possible fix of your shower head.

Check For A Worn Seal

Once you’ve found your leak, disassemble the shower head at that point if possible. Often, time can cause the o-rings and gaskets used in your shower head to harden and or crack resulting in a leak.

Here are all the steps that would help you fix a broken shower head without a plumber:

These steps would help if the shower head is broken at the base and can be fixed with a plumber’s tape. However, if it is broken beyond repair, these steps won’t help.

Time to Get a New Shower Head

Can’t fix your broken shower head? Get a new one! There are different styles to suit everyone’s needs. You can get a high-pressure shower head if you’ve been struggling with low water pressure. Or you can invest in a rain shower head for a luxurious shower experience – the choices are endless.

To help you make the right choice, here are the top three shower heads that we recommend. Do check them out.

This is one of the best tried-and-tested shower heads that we recommend. Available in a variety of colors, the chrome-finish shower head has a versatile design that can instantly add aesthetic appeal to your bath space. The full-coverage shower head features large spray to give you a drenching shower experience, allowing you to keep control over temperature to have the most comfortable shower.

If you’re looking for a complete package that’s also easy on the budget, this is the one! The Delta H20 kinetic shower delivers water in a unique wave pattern, adding more intensity, warmth, and coverage to your shower experience. Featuring lifetime warranty, the easy-to-install and easy-to-clean shower head model is an excellent choice that can save you money without compromising performance.

1. Does it require a lot of work to replace a shower head?

It is actually quite easy to replace a shower head. In fact, if fixing a shower head requires professional help, you can instead save money and bills on water energy by installing an efficient shower head instead.

2. My shower head is leaking. Is it broken?

Not necessarily. A leaking shower head may be caused by a damaged or worn-out rubber washer. The key is to inspect first before trying to fix the shower head.

Here’s a great video demonstration on inspecting shower head leaks. Do check it out:

3. How often should I change my shower head to avoid trouble?

Since bacteria thrive in moist atmospheres, they’re abundantly present in your shower. It is recommended that you replace your shower every 6 to 8 months. If that’s difficult to manage, try and clean more regularly to avoid trouble.

4. The water keeps dripping from my shower. What do I do?

While broken shower head can lead to water drips, damaged or worn out shower faucet may also lead to this problem. Again, the key is to inspect the shower head thoroughly before trying to fix it.

5. How do I keep my shower head from moving and breaking apart?

If the shower head keeps moving, it is likely to break apart with time. To keep the shower head in place, pull the ring away from the wall and stick a straw of the can until it reaches the back of the other wall. Spray for a few seconds. Continue with the other side of the pipe and spray for another few seconds. Secure the tube with a cap by screw a nail in it.