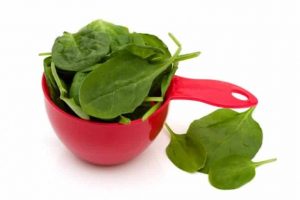 If you want to know how to measure spinach consistently when making recipes, it’s important that you measure spinach in the same way. A cup of spinach will weigh more if the leaves are small (some species of spinach have different leaves) and if they’ve been trimmed or you have diced them. You can increase your measurements’ accuracy by using the smallest spinach leaf or cutting that is appropriate for your recipe to make measuring a cupful easier.

A cup of fresh spinach weighs less in comparison to cooked spinach, which softens and wilts. A cup of cooked spinach weighs around 225 grams or 7.9 ounces. Frozen or canned spinach will also vary in weight. Finally, remember that whether you’ve drained the spinach–and how well–will impact the weight. Any extra liquid can result in a cup of spinach that weighs much more than the average, even though you’re using less than a cup of spinach. While preparing and measuring spinach the same way, each time you cook will more consistently produce a consistent weight per cup of the leafy green, it may not always be possible. For example, your recipe may require you to prepare spinach differently than you normally do, or you may purchase spinach that has always been prepared because it saves time. Finally, if you try to “eyeball” the appropriate amount of spinach by comparing it to the package’s overall weight or size, you’re likely to misestimate. If you only need a cup of spinach for your recipes, look for packages between 1 and 1.5 ounces.

How You Can Determine the Exact Weight of Spinach

When you cannot buy a small enough quantity of spinach when you need only a cup or when you need to measure the spinach for your recipe precisely, you can measure it with your kitchen scale. You can either place a measuring cup or an empty container on the scale before zeroing it out. Then, fill the measuring cup or add a cup of spinach that you’ve already measured to determine the weight. This gives you a rough estimate of how much spinach is in a cup, and you can use it for future reference. You can also repeat this process for torn, chopped, cooked, or drained spinach to determine the vegetable’s weight in each instance. Alternatively, you can always measure 30 grabs of raw spinach rather than trying to measure a cup of spinach when cooking.

Why You May Not Need to Measure Spinach By Weight

Spinach is often added to recipes to increase their bulk and nutrition rather than impacting the meal’s flavor. In fact, when smoothies and other healthy recipes call for spinach, it’s typically because of the nutrients while other ingredients mask the flavor. If you’re counting calories, note that spinach is a low-calorie food (one cup contains just 7 calories), so erring on the side of overestimating will add only a few calories. Furthermore, because spinach cooks down so much, what might appear to be a large amount when you first add it to your recipe may be the perfect amount or even a little on the lean side when the dish is complete. Many people avoid measuring spinach at all and add it to their recipes in handfuls; although, you shouldn’t consider that a cup as handfuls can vary greatly.

Adding Extra Spinach to Your Recipes

Because it’s so healthy, you may want to add spinach to recipes that do not call for it. You can add as much or little spinach to many kinds of pasta, pizzas, or quiches, not to mention salads. Remember to adjust the amount of liquid in your recipes if you plan to add significantly more (or less) spinach than the recipe calls for. Frozen or canned spinach contains more water and may not need extra liquid added to the recipe.

How nutritious is a cup of spinach?

One cup of spinach contains approximately 1 grab of carbohydrates and slightly less than 1 gram each of protein and fiber. Spinach is also high in Vitamins A, C, and K, along with iron, folic acid, and calcium. One cup contains your daily requirement of lutein and zeaxanthin, which are good for eye health. However, the nutritional content of spinach changes when you cook it.

Is spinach good if you’re on a diet?

Yes! Not only does spinach contain nutrients and fiber, but it’s low in carbohydrates and calories and has no fat. In fact, the FDA recommends adding spinach to pasta and similar dishes to reduce calories per serving.

How long does it take to cook spinach?

Spinach can cook in just a few minutes. Because of this, some recipes direct you to add this vegetable as one of the last ingredients to avoid overcooking the spinach, which can make it slimy and bitter. Keep your eye on the recipe and either serve or remove the food from the heat as soon as the spinach has become cooked.

What can I substitute for spinach in a recipe?

If you’re not a fan of spinach or don’t have any on hand, try greens such as amaranth, beet greens, or arugula in its place.

How is spinach sold?

You can purchase fresh spinach in bundles if you want to trim the leaves and remove the stems themselves. You can also purchase bags of spinach for cooking and salads that have already been trimmed. The University of Kentucky advises consumers to look for crisp green leaves that are fragrant and avoid spinach with limp or spotted leaves. Spinach will last up to 4 days before it begins to spot and wilt.