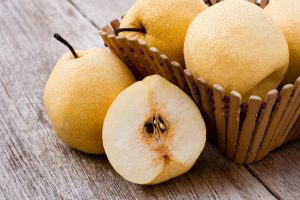 Fruits are one of the greatest gifts that mother nature created. Not only are fruits healthy, but they’re also delicious, versatile, and can be eaten fresh or in a dish. There are many different fruit varieties across the world, and all of them have their fans. Many people don’t realize that many fruits start with less common letters, such as “y.”

At first glance, there aren’t many fruits that start with the letter “y.” Many people would be hard-pressed to think of one fruit that begins with this letter. Many of the fruits featured here are yellow variations of common fruits that people enjoy regularly. That said, several unique fruits start with “y” and are featured here. Here are some of these fruits, what you can expect from their special flavors, and where to find or buy them to enjoy them yourself.

Also known as the Chinese White Pear, the Yali pear is a member of the pear family. It is enjoyed all over the world, and it is a perfect fruit for the summer months. It’s the same size as standard pears and is white on the outside when ripe. It’s a common pear to find in most supermarkets or farmer’s markets that sell fresh produce.

The Yali pear has more water content than a Bosc French pear, and it has less sugar. These facts make the Yali pear an excellent choice for juicing, cocktails, or enjoying fresh. The lowered sugar content makes it a good substitute for those looking to watch their sugar intake.

The yellow apple comes in many different forms and has a wide range of flavors to accompany them. In the United States, the most popular yellow apple is called the “Golden Delicious” apple, which is very sweet. It is also one of the most physically delicate apples and can spoil quickly without proper care or eating it at the right time. This apple is commonly found in supermarkets worldwide and is used for dessert apple recipes, such as applesauce, apple pie, and apple tart.

Several European varieties are popular across the continent, such as Belle de Boskoop from the Netherlands, Denmark’s Gravenstein, etc. All of which have different uses and recipes that call for crisp and refreshing yellow apples.

The yellow guava fruit, or “lemon” guava, is a member of the guava family that isn’t as ripe as its traditional green counterparts, but it’s no less delicious. The flavor profile is similar to a lemon’s but with the same sweetness as traditional green guava. The plant is harvested from subtropical areas worldwide, and its flowers are often used for scented candles and perfume.

What’s incredible about the yellow guava is that every part of the fruit, from the skin to the seeds, is edible, and many people eat them in this manner. With more vitamin C than an orange, this fruit is excellent for boosting the immune system. Yellow guava is also used to make preserves, juices, smoothies, and desserts, making it versatile in any form.

The yellow kiwi, also known as the gold kiwi, is sweeter than the standard green variety, with flavor notes similar to strawberries and bananas. These succulent fruits are available at any supermarket or farmer’s market that sells kiwis.

They are eaten in the same way as standard kiwis and are a sweeter substitute for their traditional counterparts in recipes, such as fruit tarts, smoothies, and preserves.

These fruits are enjoyed fresh or as a tart substitute for any recipes that usually have passion fruits, such as jams, jellies, smoothies, and cocktails.

The yellow sapote can be eaten fresh or repurposed to make other sweet dishes, such as pancakes and ice cream.

Standard supermarkets may not have them, but farmer’s markets and private watermelon farmers may grow and sell them to the public.

This fruit is a favorite in the middle east. Yemenite citron has a unique flavor profile of slightly sour, sweet, and floral. It’s a delicacy in Israel, which grows more Yemenite citron than anywhere else in the world. The large Yemenite Citron has noticeably yellow and wrinkly skin, similar to that of a lemon.

Yemenite citron is popular in juices, jams, jellies, and liqueur. This variety of citron has the added benefit of being Kosher for those with religious restrictions.

The York Imperial apple has an uneven shape, which makes it easy to identify. While it may look odd and feel different, it has a balanced sweet and tart flavor profile, making it perfect for those who may not like the overt sweetness of a Fuji apple and those who don’t like the tartness of a Granny Smith apple. The York Imperial apple is available to buy at most supermarkets and farmer’s markets.

The York Imperial is perfect for seeking a healthy snack or incorporating it into dishes that call for semi-sweet flavor profiles.

The Youngberry was born by mixing boysenberries and raspberries to create a sweet and succulent taste.

Youngberries are purchased anywhere fresh produce is found in the United States and are inexpensive for their weight. They can be found in other countries, too, but they’re more common in their country of origin, much like the other fruits on this list.

Youngberries are great fresh or as a substitute for any recipe that calls for raspberries and blackberries, like pies, parfaits, jams, and jellies.

One of the many varieties of mangoes, the young mango is a smaller version of the standard fruit with a mild and sweet flavor. Contrary to what the name might suggest, it is not an unripe mango. This fruit was born in South Florida in the United States. It sells well enough to maintain its spot in the produce section but may not be available outside the southeastern United States.

Young mangoes are enjoyed fresh or in recipes that could call for a milder mango flavor profile. They are still mangoes, so those who want to eat them must follow the same rule of removing their giant seed here.

This fruit may be the hardest to find on the list. Yumberries only grow in China and are only in season for two weeks out of the year. They look like raspberries but have a sweet and sour flavor. Due to their limited availability and their difficulty transporting because they are physically delicate, most people blend yumberries into juices. They are in south-central China, mountainous regions of Japan, and the forests of Korea and the Phillippines. The plants bloom from May to June, which is the height of their consumption and harvesting.

Eating them fresh is a rare experience, but adventurous eaters can manage it. When they do, it’s best to carry napkins due to the high juice content of the fruit.

This fruit has more in common with nuts than fruits, but that doesn’t make it less tasty. For some hackberries, the only edible part of this fruit is the seed, which is protected by the fruit’s hard exterior. As a result, the hackberry is most often used as a paste after blending or crushing. The Yunnan Hackberry is native to the Yunnan province of China, where it gets its name. Hackberries aren’t sold in traditional markets, but their trees are, so this one is perfect for those looking to plant a tree on their property and enjoy fresh fruit as they grow.

Don’t let the appearance of a wrinkled orange fool you. The yuzu fruit has more in common with the flavor profile of a lemon than an orange, and it’s used similarly across East Asian cuisines. Due to import laws, it’s impossible to enjoy yuzu outside of an East or Southeast Asian nation. Japan is the best choice among these nations, as it grows 50% of all the yuzu used for consumption.

The best way to enjoy yuzu is to treat it like a lemon, using it as a garnish for many dishes or as a tart addition to a cocktail.

Now that you know about some of these fantastic fruits, it’s best to find them and try them yourself. Many of these fruits are easy to find, and they’re simple to enjoy or incorporate in existing fruit recipes.