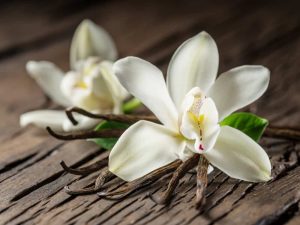 We will be sharing a list of fruits that start with the letter V in this post. Whether you are a fruit lover, a curious person, or someone who enjoys trivia, you will find this list interesting and informative.

Below is the list of all fruits that start with the letter V:

Many people are surprised to discover that vanilla is a fruit that comes from a tropical orchid. Madagascar, in Africa, is currently the world’s leading supplier of vanilla.

The vanilla fruit, better known as the pod or bean, is picked when green and not yet ripe and dried for many months. It takes between 3-5 years for Vanilla fruit to grow and fully mature. Home gardeners have the best results when they grow Vanilla fruit in a greenhouse because they can control factors such as light and humidity.

Vanilla is probably one of the most ubiquitous flavorings on the planet used in all kinds of baked goods and dairy products, including my favorite milkshake.

The velvet tamarind is a popular snack among Nigerian children who peel off the black velvet skin and then eat the orange pulp raw. Some research highlights the micro nutritional benefits of velvet tamarind, including boosting immunity, treating hypoglycemia, and as an analgesic. It is also rich in vitamin C.

The Victoria Plum has been enjoyed in the UK since the 1800s. It was named after Queen Victoria during her reign from 1819 to 1901. These plums are purple-colored and are oval-shaped.

When picked fresh, the Victoria plums that ripen on your backyard tree are lovely. If you buy them at the grocery store, the fruit may have been picked early and allowed to ripen off-tree, thereby losing some of their flavors. A Victoria plum tree planted in your garden will produce plums that are perfect for jams and pies.

From golden-yellow to orange to purplish-red, Velvet Apples are available in a variety of colors. Their stem edges have hairs, and their calyxes are darkened and permanent. They are shaped like persimmons with a short, squat shape, while the seeds are rounded.

Often, they grow in clusters of two to four fruits, resulting in flat spots on the fruit, and are between 5 to 10 centimeters in width. Generally, the thin, rough, and bitter skin is removed. The unpleasant scent detected in some varieties will dissipate after removing the skin.

When mature, the flesh will be white to off-white and crumbly but soften over time as it ripens. Described as sweet and fruity while containing hints of chewy bubblegum, the taste is akin to banana-flavored apples or strawberry-mango yogurt. Most people think that darker-colored fruits are sweeter than lighter ones.

Most often, velvet apples are consumed raw. The flesh is scooped from the halved fruit after the fruit is split in half. You can slice or quarter fruits, garnish them with Lemon or lime juice, then serve. You can prepare salads or desserts with the flesh of this tropical fruit. You can puree the flesh and use it for desserts or beverages. You can preserve velvet apples by drying them.

The Valencia orange (Citrus sinensis) is sweet with a smooth, bright yellow, and shiny skin. It is most commonly used to make marmalade, jelly, and for its juice.

The Valencia orange bears its name after Valencia, Spain, where it originated.

Valencia oranges, also called the summer orange, have at least fifty varieties and hybrids. Among the most popular varieties of orange, this orange is enjoyed by millions worldwide. Valencia oranges ripen in the summer. They are the only oranges that become ripe late in the year.

Perhaps the most well-known application of vacarese is its use in blending Chateauneuf du Pape red wines. Known as Brun Argente, the dark-skinned berry originated in France. Brun Argente is the French word for brown, which describes the grape’s skin and leaves, a brownish color.

Grapes from the Vaccarese variety grow in large bunches that are compact in shape. Because of the size and shape of the berries, it becomes difficult for the bunches to get any air, which can result in rot or botrytis. In the Southern Rhone Valley, the grape continues to become less popular. Châteauneuf du Pape consists of barely four hectares of vines today. One of the few domains to continue using Vaccarese in the blend is Clos St. Jean.

Vaccarese adds little color depth to a blend when added. Instead, it gives the wine a spicy, peppery character and a somewhat tannic structure. The grape is also grown in the Cotes du Rhone region, where Rose’s wines originate.

Valencia Pride Mango is a quality variety in the mid-late season because of its high yield and relative reliability. Descended from the Haden mango, it emerged in South Florida in the early 1940s. Its fruit is delicious, juicy, and sweet. The tropical flavor is very aromatic, and the consistency is smooth, creamy, almost fiber-free.

This mango tree proliferates and is part of the fastest-growing mango tree varieties in Florida. They can reach a height of over 50 feet with an open and spreading canopy.

This mango has a beautiful yellow ground color, a prominent beak, and a heavy blush of crimson. Van Dyke mangoes measure approximately 10.5cm long and 7.9cm wide on average. There are several varieties of Van Dyke mangos, and each has thick skin with many white/yellow lenticels.

Vernaccia grapes, which produce the Vernaccia wines, are grown in the hills around Oristano in Sardinia. They are used to make a still, mildly aromatic, sometimes sparkling wine called Vernaccia di Oristano.

According to some citrus specialists, Volkamer Lemons are hybrids between the Lemon and sour oranges, but others believe they are a variety of mandarin lime. Known for more than three centuries, the Volkamer Lemon is acidic and slightly bitter with a pleasant fragrance and flavor.

Italian lemon cultivars have been using Volkamer as a rootstock for years. As a lower acid alternative to the rough Lemon.

We hope you found the information helpful. Let us know if you have any further questions on the fruits in this list.