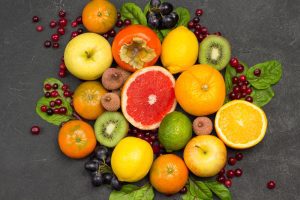 There are many fruits around the world, some widely known everywhere, others only known in certain locations. Though it is easy to list fruits that start with the first few letters of the alphabet, you might feel stumped when you get to F.

To make it easier for you and increase your fruity knowledge, here are the top fruits and fruit varieties that begin with the letter F!

Fairchild tangerines were developed in the early 1960s in California. They are a cross between a clementine and an Orlando tangelo. These days, they are known as some of the earliest citrus varieties available. These medium-sized, vibrant fruits are mild and delicious. They are still grown widely throughout Arizona and California, as they are highly resistant to drought.

The false mastic fruit isn’t widely known, but these trees are hard to miss. They grow in Florida, along the Gulf Coast, the Caribbean, and Central and South America and can get up to 80 feet tall.

The fruit is small and deep gold to bright orange, about the size of a large olive. It contains a large pit surrounded by gummy flesh. Most people eat the fruit fresh from the tree while avoiding its distinct flowers, described as having a cheesy odor.

This oddly-named plant sounds like something out of a story, but it is real! Also called sparkleberry, humans don’t usually eat this plant. It is not poisonous — most people simply find it unpleasantly textured. The fruit is sweet but tends to be low in juice and mealy.

However, wildlife, including birds and bees, widely enjoy farkleberries. The tree’s flowers are very fragrant, and it is a beautiful ornamental. Farkleberries are distantly related to huckleberries and blueberries.

The Fascell mango is a variety of mango cultivated in Florida in the 1930s. These days, it continues to be a significant part of the commercial mango market in Florida.

The Fascell mango is characterized by fruit with no fibers, giving it a smooth rather than stringy texture. Its skin is yellow but has a deep red blush. It has a mild sweetness and a pleasant aroma.

The Fazli mango is a popular mango variety in Bangladesh and West Bengal in India. It is ready for harvest late in the season, long after harvesters have picked other varieties. This variety can be huge, growing as heavy as a kilo, or 2.2 lbs.

Though people do not widely eat it outside of India and Bangladesh, opportunities for exporting are growing. You can eat Fazli mangoes raw, but they are often used for pickling or making sauces.

The Fe’i banana is a banana variety grown primarily on the Pacific islands, including French Polynesia. Unlike most banana varieties, the Fe’i is squat and thick with a reddish-orange peel. The inside flesh is usually orange or yellow.

Because Fe’i bananas are not grown commercially, they are generally only eaten near where they are grown. Most people find raw Fe’i bananas unpalatable since they are less sweet and very high in starch. They are usually cooked, much like plantains.

The feijoa is a fruit that is grown widely throughout Central and South America. Also called pineapple guava or guavasteen, the feijoa can be eaten fresh or used as a base for jam, jelly, or other fruit preserves.

Many people think that the fruit tastes like pineapple, hence its alternative name. Others compare it to apples or mint. Feijoas’ flesh is firm on the outside and pulpy and soft inside, split into several segments.

The Fibrous Satinash is a tropical fruit that grows in the rainforest, mostly in Indonesia. This tiny red fruit is either red or pink and is only about two centimeters across. The flesh is very sour, so people tend not to consume it raw but often use it in jam and preserves. The Fibrous Satinash has a characteristic “petal” shape on one end of the fruit, reminiscent of a pomegranate.

Figs are moderately well known since they are grown commercially and enjoyed around the world. These small, soft fruits are technically inverted flowers. The outside flesh is purple or green, while the inside flesh is pink and filled with tiny seeds.

Though they originated in the Mediterranean and Asia, you can now find them anywhere in the world. Figs, which are a part of the mulberry family, contain many excellent vitamins and minerals.

Finger limes originated in Australia and are now a gourmet treat. Also known as caviar limes, these small citrus fruits are high in vitamin C. They earn their name from their distinctive shape, which is reminiscent of a finger. The external skin is pink, red, or green.

The inside of a finger lime is the source of its other name, caviar lime. The pulp consists of small “bubbles” that look a lot like caviar eggs. These are tangy and burst as you chew them.

The Five Flavor Berry comes from a vine that grows throughout China, Korea, Japan, and parts of Russia. Its name comes from the fact that it contains five distinct flavors: salty, sweet, sour, bitter, and pungent or spicy.

The Five Flavor Berry grows in large clusters of small red berries. These are usually dried or made into juice. Where this type of berry grows, people typically do not eat it as a form of nourishment. Instead, they use it in several traditional forms of medicine.

The Flatwoods plum is a wild plum variety that is becoming more popular with home growers. Farmers frequently feed them to their pigs, but this lesser-known fruit is a delicious snack for humans, too.

The plums contain high levels of hydrogen cyanide, which is not dangerous in these quantities but lends the fruit a bitter taste. Some people find them pleasantly tart, while others think they are too strong to eat raw. For this reason, people usually make them into preserves.

The name of the Florentine Citron comes from the place where it first developed. It is an extremely fragrant and sweet-tart citrus fruit believed to be a hybrid of the lemon and the citron. You do not often find it outside of Italy, even to this day.

However, it is known and loved locally and has also developed popularity in other niche demographics. People have further used it as a parent of the Bizzaria, a combination of the Florentine citron and the sour orange.

Despite its name, the Florida Cherry does not look much like a cherry at all. Also called a Surinam Cherry, this small fruit looks like a tiny gourd. It is usually red or deep orange and about the size of an apple.

It is an invasive plant in Florida, so much so that Floridians are advised not to plant it. Although Florida cherries are sweet and full of juice, people tend to find them delicious or disgusting. The flavor is unique and resinous.

The Florida Strangler Fig is another plant that is invasive in Florida. It earns its name due to its habit of growing up existing trees, eventually killing them. The fruit begins yellow and eventually turns purple or red. Like standard figs, the tree’s fruits are edible. Indigenous people and settlers have eaten the fruit for centuries.

Fox grapes are a type of wild grape from which the Concord grape and other slipskin grapes descend. On their own, they are low in sugar, which makes them unpleasant to eat raw and insufficient to ferment for alcohol. Instead, fox grapes are ideal for jam and other preserves, which concentrate their natural sugars.

Fuji apples are one of the most popular apple varieties in the world. Born in Japan, they have traveled across the planet to become the third-most widely-sold apples in the United States, following Gala and Red Delicious varieties.

Fuji apples are incredibly crisp and sweet. They have soft pink skin with yellow flesh. With their juice containing more than 18 percent sugar, they are considered one of the sweetest apples in the world.

The Fukushu Kumquat comes from a small ornamental citrus tree originally in Japan. Despite the tree’s small size, the fruit itself is larger than many other kumquat varieties, and the tree is unusually hardy. Both the inner and outer flesh is bright orange and very acidic. It also contains a high number of seeds. The rind is edible.

Although home gardeners can plant this tree in their yard, Fukushu Kumquats are not widely grown commercially outside Japan.

Though you may have only heard of some of these, many fruits begin with the letter F. These fruits are enjoyed around the world or locally where they are grown.