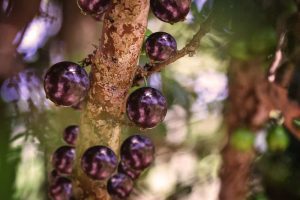 For many people around the world, eating delicious food is what gives them life. Some great foods and dishes start with the letter “J,” and knowing which foods begin with these letters can open a world of possibilities for new flavors and experiences.

Jabuticaba is one of the most popular fruits from South America, enjoyed by the people of Peru, Brazil, Argentina, Bolivia, and Paraguay. Jabuticaba is a versatile fruit with different uses ranging from jams, juices, wines, or enjoyed fresh. It is a sweet fruit with high water content, making it great for the summer months. Jabuticaba also has a short shelf-life, which means that it is unfit for global markets, and most are eaten or prepared within three to four days of harvesting. The Jabuticaba tree is a popular choice for bonsai enthusiasts due to how slow it grows, and once it is fully grown, it will offer fresh fruits to those who plant it in their backyards.

The humble jackfruit is a mystery to many people who don’t consume it normally or know it exists. Jackfruits are native to Southeast Asia and India but grow as far north as southern parts of China and as far south as Indonesia. Jackfruits have high water content and are perfect for those looking to hydrate themselves during the warm summer months.

Jackfruits are eaten fresh, like most other fruits, but have a wide range of culinary uses. It’s popular in curry dishes, salads, and it is even deep-fried. The jackfruit has the same consistency and texture as pulled pork when cooked, and it can be a meat substitute for those with dietary restrictions.

One of the mackerel family members, the jack mackerel, is a smaller fish native to the Pacific Ocean. Due to its size, the jack mackerel can substitute sardines or other recipes that call for small fish. It does not lack flavor, which makes it a fantastic choice for replacing tuna and salmon. It is a safer substitute for those wary of mercury consumption because it’s lower on the aquatic food chain than larger fish with higher concentrations.

The Jack Mackerel is eaten across the Pacific Ocean and is prepared in the same way as other fish. Baking, frying, grilling, in sushi or sashimi, or stews. There are as many options for the Jack Mackerel as there are fish in the sea.

A jaffle is a South African pressed sandwich with savory fillings, similar to the Italian panini. Jaffles combine the pressed sandwich with many different varieties and offer a unique round shape uncommon in many sandwiches. This sandwich is popular with children due to how simple it is to create and eat.

Jaffles also come in the form of soft and buttery bread filled with fruits, chocolate, nuts, and cream. Jaffles are simple to make at home or served at restaurants in South Africa.

Arguably the world’s most popular chili pepper, the jalapeno is as delicious as it is famous. It originated in Mexico and spread across the world as the star of spicy peppers. Jalapenos are especially popular in the United States and Latin America. Many dishes utilize jalapenos in these regions, and they are an excellent addition for anyone looking to add a kick to their meal.

Jalapenos have a wide range of uses, from sauces to fresh salads, and are edible fresh. Mexico’s iconic tacos and burritos use the iconic chili pepper, but they are also popular as garnishes for barbecued meats, soups and stews, and cocktails.

Jambalaya is a dish from New Orleans, Louisiana, in the United States. New Orleans is a city known for its unique and world-renowned Cajun cuisine, and Jambalaya is one of the star dishes. The main ingredients of Jambalaya are rice, meat, vegetables, and stock, making it similar to the Spanish dish paella. The most popular meat in Jambalaya is Andouille sausage, which has a spicy flavor, and it’s accompanied by pork or chicken in the dish. Seafood is also popular in Jambalaya, usually consisting of crayfish or shrimp. The vegetables in this dish include the “holy trinity” of Cajun cuisine, which are bell peppers, onions, and celery, but other vegetables and garnishes, such as garlic or shallots, are common.

Jambon pastries are an Irish pastry filled with ham and cheese. This dish features puff pastries filled with ham and assorted cheese, making it a simple recipe to prepare at home. Jambon is arguably the newest dish featured on this list, as it originated in the 1990s to have portable food for busy workers. The preferred cheese is cheddar, but variations on the ham and different cheeses in the pastry are possible with how simple it is to make this dish.

Who doesn’t love jam on toast or jellies in a dessert? Jams and jellies are common in all parts of the world and appear in many recipes. They are available in supermarkets worldwide and are simple to make at home with fresh fruits. Many specialty jams and jellies offered by independent sellers are purchased at farmer’s markets and provide unique experiences for adventurous eaters.

Jams and jellies are in many simple dishes, such as jam on toast, peanut butter and jelly sandwiches, or a “dressing” for fruit salads. Jams and jellies are popular in fruit desserts, too, such as fruit pastries, tarts, and cakes to give a tangy and sweet taste to the palate and the dish.

One of the staple dishes in Japan, Japanese curry rose to popularity in the island nation during the 20th century. It’s a popular dish available in many Japanese restaurants, with many different home variations. The five principal ingredients are rice, potatoes, onions, carrots, and curry roux, which can be homemade or bought at any Japanese supermarket or in the ethnic foods section at supermarkets worldwide, making Japanese curry a simple dish to make for people worldwide.

Japanese curry is one of the most versatile dishes in Japanese cuisine, with different recipes and spice levels depending on the chef. It’s a dish that many families enjoy eating together, so this is a great dish to enjoy with loved ones.

The Java plum is native to Southeast Asia, and it’s one of the most reliable food sources in the region due to how quickly the plant grows. Sadly, this also makes it an invasive species and harmful to plants outside of its native area. The fruit was introduced to the United States in the early 20th century and remains one of the most popular agricultural plants for consumption in the nation.

The Java plum’s uses are much like other plums and are eaten fresh or in juices, jellies, and jams.

Jerk refers to the spices and herbs native to the island nation of Jamaica served as a seasoning and sauce over a slow-cooked protein. While jerk chicken is the most well-known variety, it’s far from the only one. Beef, pork, fish, lamb, and tofu are all viable to jerk, with similarly succulent results.

Jerk spices and seasoning are available in supermarkets worldwide, but it’s also possible to create the sauce and the herbs at home, with most of the ingredients available in the spice section.

Jerky is one of the most popular snack foods in the United States. Dried and seasoned pieces of meat from familiar protein sources are available across all 50 states. Jerky can come in tube-like forms, in shredded pieces, or bite-size square shapes to appease the snack cravings of those who try it.

Beef jerky is the most popular variant, and there are several seasonings such as teriyaki, hickory, mesquite, and salt and pepper flavoring of jerky. One of the more recent and popular forms of jerky is bacon jerky, which uses strips of pork belly to create a unique and savory experience for those who try it.

This dish is a delicacy in South Korea. Jokbal is pig’s trotters braised in a combination of soy sauce, ginger, and garlic. This savory dish is found all over Seoul in restaurants, street vendors, and homes. Jokbal is perfect for those with large appetites, as the portions of Jokbal served across the country are sufficient for big eaters or large groups. Jokbal is available in a spicy variation, as well, and it’s famous enough to be called “Fire Jokbal.” Many restaurants that serve Jokbal opened several delivery chains across the country, but the recipe is simple enough to prepare at home.

Jook is a simple rice porridge popular in East Asia containing rice, chicken or vegetable stock, bits of roasted pork or chicken, and ginger or scallion seasonings all cooked in a soup. Jook is enjoyed as breakfast fare and has many variations depending on the country. Much like chicken noodle soup in western nations, Jook is served to people who are ill or during the cold months to alleviate the harsh temperatures.

One of the most beloved fruits worldwide, Juniper berries are known for their sharp but smooth flavor. These berries are especially popular in Europe, where they’re from, and they’re often used to accompany rich meat dishes and roasts. Juniper berries are the main ingredient in gin, one of the world’s most popular and widely consumed spirits.

Juniper berries are popular during the holiday season in Europe. Many countries offer seasonal recipes, which can be entrees, desserts, drinks, or healthy snacks.