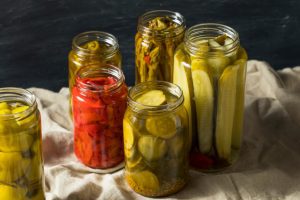 Everyone loves pickles. They are great on sandwiches and burgers, they can stand alone as a snack, and some people even enjoy pickle-flavored drinks. It’s no wonder that so many kinds of pickles are around, but that leads to an important question.

What is the difference between kosher and polish pickles?

Primarily, the difference is in flavor. You prepare polish and kosher dill pickles much the same way, but Polish pickles use a wider range of seasonings and tend to be spicier with a stronger garlic flavor.

Of course, there is a lot more behind these differences. When you look into the origins of each style of pickle and why they are made differently, it becomes clear why you would expect such different flavors.

The Real Meaning of Kosher

Judaism, as a religious practice, has several dietary restrictions. Those restrictions are outlined in the laws of Kashrus, and any food that is in full compliance with these restrictions can be called kosher.

Kosher restrictions limit the ingredients of food and also dictate some processes used in food preparation. Those processes might even require the flood to be formally blessed by a rabbi. In general, creating kosher foods requires specific care and attention to the rules.

When it comes to pickles, kosher pickles specifically require the use of kosher salt. Kosher salt is not allowed to have additives in it. That leads to a purer flavor, and most notably, it excludes the addition of iodine. Kosher salt also utilizes larger crystal grains, making it better suited for preserving foods. It’s not surprising that kosher salt ultimately became a key ingredient in many pickles.

Jewish people in Eastern Europe developed kosher dill pickles. They made their pickling processes conform to their religious practices, and eventually, a unique flavor profile emerged. Ultimately, this style of pickle became popular worldwide and not just among practitioners of Judaism, and today, kosher pickles can be found almost anywhere and enjoyed by anyone.

While religiously kosher dill pickles certainly do exist, the term ‘kosher pickle’ more often refers to the flavor profile that emerged from tradition. Modern’ kosher’ pickles are made to taste like traditional kosher pickles, but they might not conform to Judaic dietary restrictions.

The kosher flavor profile stems from the heavy use of salt, vinegar, and dill weed with a de-emphasis on additional ingredients. While you may find garlic and other seasonings on the ingredients list for kosher pickles, the heaviest flavors will be salt, vinegar, and dill weed. This simplified palate produces a consistent flavor profile. When you get kosher pickles, you can expect them to taste more or less the same regardless of who prepared them.

Importing to the Americas

Jewish immigrants in the New York area primarily introduced traditional pickles to North America. Their kosher method was well established, and they made pickles that were in standing with their traditions and beliefs.

As a result, kosher dill pickles became the dominant pickle flavor in the United States for a long time. Even today, it is easier to find kosher-flavored pickles than polish flavors, although both are fairly common.

Polish pickles produce a different flavor profile when compared to kosher pickles. This flavor also originated in Eastern Europe. Despite that origin, the ‘Polish’ in Polish Pickles is not about their origin but their flavor profile.

Polish pickles are made in primarily the same way as kosher pickles. Both are brined in salt and vinegar with heavy use of dill weeds. Where the Polish flavor differs is in the use of additional spices.

Polish pickles often use much more garlic than kosher. Polish pickles select from a wider range of spices, and they are usually much spicier in flavor as well. On top of all of that, Polish flavors might include mustard seeds. Overall, the additional spices lead to more variety in Polish flavors. You can get a wide range, even though they are all dill pickles.

How can you tell if a pickle is kosher?

If you are interested in pickles that are kosher according to Judaic Law, there is a certification process that rabbis regulate. Any food officially regarded as kosher has a symbolic ‘K’ inscribed by a circle.

Are kosher or Polish pickles better?

The superior flavor depends on the preferences of the eater. Kosher pickles have a stronger salt and vinegar flavor and less variance in the eating experience. Polish pickles tend to be spicier and come in a wider range of flavors.

How are pickles made?

Essentially, pickles are made by soaking cucumbers in a solution that will preserve them for a very long time. Dill pickles are typically soaked in salt and vinegar solutions. Dill weed is added for extra flavor. Depending on the type of dill pickle, any number of other spices might also be added.

How long do pickles last?

Commercially produced pickles can last two years or longer while sealed. Pickling is a preservation process, and brining cucumbers fortifies them against fermentation and rot.

Are there kosher sweet pickles?

Traditionally, kosher pickles are not sweet. That said, it is possible to make sweet pickles under Judaic kosher food laws.

What foods can be pickled?

Just about any produce can be pickled, and almost all of them are. Some of the most common fruit and vegetable choices for pickling are cucumbers, peppers, cherries, berries, and peaches, and this is nowhere near a comprehensive list.

Where did pickling originate?

Dill pickling popular in the United States and much of Europe originated in Eastern Europe. Most credit populations in modern Poland and Russia. Pickling as general food preparation is much older. It dates back to Mesopotamia as far back as 2400 B.C.