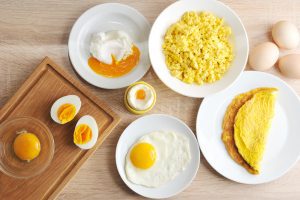 Scrambled eggs are a breakfast staple because they’re easy to make. But can you make it even easier by shaking an egg to scramble it?

You cannot shake a whole egg to scramble the egg in its shell before you even crack it open, even if that would make breakfast a breeze. Whites are anchored to the yolk by membranes known as chalaza, making it hard to scramble eggs by shaking them unless you shake vigorously multiple times. It’s slow and may not work.

The most effective way to break up egg membranes is by whisking them quickly to combine the egg white and yolk. Electric mixers make it even easier.

Why You Can’t Easily Shake an Egg to Scramble It

You’ve probably noticed that egg yolks retain their shape unless you break them. Even then, you can see the membranes that anchor an egg white to its yolks when cooking with eggs. If you fail to use enough speed to beat an egg properly, those membranes exist. That’s why French toast can become more like a fried egg if you don’t stir well enough. Because speed is key to breaking up an egg, scrambling inside the shell won’t work well.

Some online recipes explain how to scramble an egg in its shell to create a hard-boiled, scrambled egg in the shell or “golden egg” that some people love. These recipes advise you to shake an egg vigorously, then let it sit for five minutes for a total of five times. However, this will take at least 25 minutes (even more if you want to scramble multiple eggs). Traditional egg scrambling is quicker and makes fluffy scrambled eggs that are perfect for breakfast, whether with cheese or plain.

Scrambling An Egg in the Shell

Companies have created devices that attempt to scramble an egg that’s still in its shell by shaking it or making a small hole in it and inserting a needle-like tip. These devices work to varying degrees. It’s much easier to either hard boil or scramble eggs, not both.

Another option is to cut a short length of material from a stocking (or sleeve or bread bag) and place the egg inside it. You can also wrap a tea towel around the egg if you’re careful not to let the egg fall out.

Hold the fabric on either end and twist to make the fabric tighten. Let the material relax to spin the egg. Repeat this process at least 20 times.

Scrambling An Egg: Bowl or Pan? Mixer or Hand?

Some people prefer to crack their eggs into a bowl to whisk. This method allows you to easily season your eggs and add other ingredients that you want to add to your scramble. It’s also ideal if