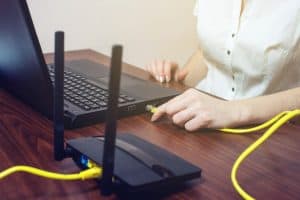 Perhaps your internet speeds are fast, but they’re intermittent. Or maybe you just don’t want to split the bill with your roommate.

How Can You Get Two Internet Providers in One House?

The scope of getting two internet providers in one house is the same as purchasing one, just twice. You would need to connect with two providers who service your area. You should distinctly tell them that you’re trying to setup two separate lines.

This is important. It’s very likely if you’re moving into a house or an apartment, there are already lines run. Most companies are going to use the lines that are already run to connect you. You don’t want the second company’s install to disconnect the first.

In one house, this is easy. They’ll come out and run connections. But can you have two different internet providers in one apartment? In an apartment, you may need to connect with the management. You might get lucky and there may be lines from multiple companies already there; if a prior tenant, for instance, used “ABC Communications,” and the tenant before used “XYZ Communications,” the apartment could be wired for both.

Otherwise, an apartment might be more difficult, because you need lines run into the apartment complex itself. You will need to talk to the property management company or whoever handles the telecommunications in-depth to find out more.

What Are the Advantages to Two Internet Providers in One House?

First, there’s stability. If one service is very fast but unstable, you can fail over to another line. That requires some work (you’ll have to properly configure your routers and switches), but it means that you’ll always have reliable internet access. But this is rare.

Another reason you might do this is if you don’t want to have to split a single bill. Your roommate might need a connection that’s very fast and very expensive, but you might just want basic internet for basic tasks. Running two lines means you won’t interfere with each other.

Finally, you might need two lines because the lines are used for different things. For example, you might want an internet provider for your high speed internet. But you might also want a satellite cable package, which may require the satellite company’s internet.

The latter example is usually the scenario; satellite internet services are often paired with wired services this way. But there are a variety of reasons two internet providers might be preferable, and it’s an entirely doable situation with some finagling.

What Are the Disadvantages of Two Internet Providers?

First, it can be far more expensive than just paying for one expensive provider. So, if you’re doing it to avoid splitting a bill, it’s probably better to split the bill.

But there’s another issue: often, many places don’t have two good providers. There are areas, especially rural areas, in which only one provider is even available. So, you could end up in a situation where there’s really only one provider to choose from.

Having two providers means that different wiring will need to come out to your home which can be expensive if you need to pay for the wiring to be run (mostly common in rural areas; in city areas, the business usually pays for it on its own). It means two bills to keep track of. And so forth.

Generally, the two providers are not going to interfere with each other. If you have a complex system where they’re both networked together (like a failover system), there could be technical issues, but that’s an outlier.

Will Your ISP Let You Have Two Internet Providers?

One small complication is that an ISP doesn’t always want to do this.

Usually an ISP does use the existing lines. So if they come out and see that you already have lines, they won’t want to run more wire. They will want to use whoever installed first.

You can explain that you want multiple wires run. But that doesn’t obligate them to do so. They may insist that you pay to run more fiber. This can be very costly depending on how much fiber has to be run. So, you’ll need to weigh exactly how much you want two ISPs.

For businesses, having two ISPs isn’t as big of a deal. But for an individual, a lot of the cost of running wires is subsidized by customers who don’t need wires run (in addition to the service fees). You might need to call around to multiple ISPs to find one that is okay with not using the already run fiber.

But if you have a satellite service that doesn’t need that fiber, it’s less likely to be a problem. Most ISPs aren’t going to bat an eye at establishing a wired line at a house with satellite service, or vice versa.

What About Cellular Internet Providers?

Another example of having multiple ISPs comes from something that many people don’t realize; their cellular service.

Many people actually have two ISPs, technically, especially if they can turn a hotspot on for their phone. Phones, tablets, and other devices can access the internet. So, the telecommunications companies are often acting as telecom providers.

AT&T, Verizon, and other telecommunications services also provide internet access. However, they generally provide it on a per device basis, but they do have internet packages. Because these internet packages often use cellular, mobile data, they don’t actually need to connect through a wired connection.

So people very commonly have multiple ISPs, in reality, because they have a wired connection and a cellular connection. And it’s even possible to have a wired, cellular, and satellite connection, or any assortment of these, at the same time.

Cellular ISPs tend to be more expensive than other ISPs, but they also cover a lot of territory and operate in rural areas. If you just need an internet service that is reliable, a cellular service is going to be easy to set up.