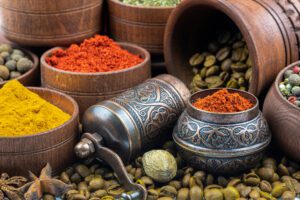 A tiny dash of spice can dramatically alter a dish, adding distinctive flavor to otherwise bland ingredients. You’ll be surprised to know how many unique spices are available out there. Read to learn all about different spices and pick your favorite ones!

Spices are aromatic flavorings derived from seeds, bark, fruits, rhizomes, and other plant parts. Spices are highly valued trade goods used to season and preserve food and as dyes, medicines, and perfumes. The word spice comes from the Latin word species, which means merchandise or wares.

They’re available in dried form, but that doesn’t mean spices last forever. Their strong flavors dissipate over time, especially if exposed to air and light.

Allspice is a brown dried berry native to West Indies and Central America. This versatile seasoning has a distinctive flavor and can be used to season Swedish meatballs. It’s also a key flavor in Jamaican jerk seasoning and tastes like a combination of nutmeg, cinnamon, and clove.

You can use allspice in ground form or whole. Once ground, allspice can lose its zest. Ground spices have a more intense flavor than whole cloves or berries. Whole allspice berries are perfect for stews and soups and pickling or brining.

Mace is a brownish-yellow spice derived from the lacy coating of the nutmeg seed. However, it has a sweeter and more refined flavor than nutmeg. It is available in ground form and is paired with other aromatic spices. Mace is popular in Asian, Indian, Caribbean, and Moroccan cuisines. You’ll find mace in spice blends and baked goods, as well as savory dishes like stews, sauces, and poultry and seafood recipes.

You can use Anise seed as a spice, either ground or whole. You can also make anise essential oil and extract it from the seeds. The seeds are actually the small ovoid fruit of the Pimpinella anisum, a flowering plant cultivated in Egypt, the Middle East, and Europe. They are small, gray, and slightly curved, with a strong aroma of licorice. The Anise plant also has aromatic leaves and stems that can be used as herbs in many meat-based dishes. Plus, you can use this spice to flavor drinks such as ouzo and pastis.

Caraway is another parsley family member and was one of the first spices cultivated in Europe. It can add flavor to pork, sauerkraut, and potato dishes. Its warm, anise-like flavor comes from anethole, carvone, and limonene.

Cardamom is a part of the ginger family indigenous to southwest India. It’s warm, floral, and fruity flavor is essential to Arabic coffee and Nordic baked goods. The two main cardamom varieties are Mysore and Malabar.

Mysore is a larger, green variety with woody and eucalyptus notes. And Malabar is smaller with floral and sweet notes.

Large cardamom or black cardamom comes from a different plant and grows in the eastern Himalayas. It has a long reddish pod with strong flavors and is used in savory dishes, such as pho.

Celery seed is the tiny fruit of the same plant that produces celery stalks. It has a strong celery flavor used in Mediterranean cuisine and as a traditional medicine in China. You can try ground celery seed in pickles, soups, sausages, or in a blend with salt to make celery salt.

Chiles is the most popular spice worldwide, with a consumption rate twenty times greater than black pepper. There are twenty-five species of chiles, of which only five have been domesticated. Most of the chiles we consume come from Capsicum annuum, cultivated in Mexico 5,000 years ago.

You can eat chiles fresh, but drying them for the spice cabinet will enhance their flavors. Dried whole chiles are popular in Mexican cuisine to flavor soups and stews. They also add heat to Middle Eastern cuisine.

Cloves are dried flower buds of the clove tree native to Indonesia. They have been popular in Chinese and European cuisine since the Middle Ages. Cloves have the highest concentration of aromatic compounds of any spice. Their unique flavor is essential in roasted ham, Chinese five spices, apple crumble, and mulled wine. Go easy with cloves, as they can easily overpower.

Try cloves in our favorite recipe.

Coriander seeds come from the tiny fruits that appear after the cilantro herb flowers. They are harvested when green or left to brown and dry out on the plant. Fresh ground coriander has a bright flavor that’s perfect for dressing a salad. It’s found in most spice cabinets and has a citrusy, floral taste that can be paired with cumin in Indian cuisine, homemade smash burgers, Moroccan tagines, or poaching liquor for seafood.

Dill spice is the dried oval fruit of the same plant that produces the fresh dill herb. It’s native to the Mediterranean and southeastern Europe and is used to flavor borscht and pickles. Its main flavor compound is carvone, also found in spearmint and caraway.

Fresh plant leaves are generally considered herbs. But a few dried plant leaves deserve a place in the spice cabinet, including rosemary, thyme, curry leaves, kaffir lime leaves, and oregano. Remember that dried plant leaves taste different from their fresh varieties and can’t be substituted. One of the most common dried plant leaves is a bay leaf from the laurel family. You can use bay leaves to flavor soups, stews, and marinades. Also, Sassafras leaves are dried and ground to make Filé powder used in gumbo and other Creole dishes.

Fennel seeds are the dried fruits of the fennel plant, which are also consumed as a vegetable and herbs. Plus, it grows like a weed in parts of the US. Fennel spice has a strong flavor featuring bitter, floral, fresh, and pine notes. It pairs well with pork and is an essential part of Italian sausage and Ethiopian berbere seasoning.

Fenugreek is a flat, brownish-yellow seed from a Mediterranean plant in the pea family. It has bittersweet and celery-like flavors and is used to make chutneys and in Moroccan spice blends. You can roast fenugreek seeds to reduce their bitterness and grind them to store in your spice cabinet.

Ginger comes from the underground stem of Zingiber officinale, a flowering plant from the same family as turmeric and cardamom. The sharp flavor of fresh ginger comes from its aromatic compounds. These compounds give out a sweeter flavor when heated or dried, and that’s why ground ginger is popular in pumpkin pies, gingerbread, and gingersnaps. It’s much less pungent than the fresh stuff.

These are the shiny brown seeds of Aframomum melegueta, a reedy plant from the ginger family native to the Gulf of Guinea and western Africa. They have a woody, floral, and slightly spicy flavor and are popular as a substitute for black pepper.

Mustard is the second-most-popular spice in the United States after peppercorn. It’s no surprise since mustard pairs well with all types of meats, poultry, and seafood.

Nigella or black cumin is a small black seed found in southwest Asia and the Mediterranean. It has a fennel-like scent and mild flavor reminiscent of oregano and nutmeg. You can sprinkle ground Nigella seeds are on naan bread or knead them into Armenian string cheese.

This spice comes from the autumn crocus flower and is primarily grown in Iran and India. It’s one of the most expensive spices in the world. That’s because of the hand-harvesting process that takes about 200 hours of painstaking labor per pound of dried saffron.

Saffron adds its bitter, haylike aroma and golden color to various dishes such as paella and bouillabaisse.

This spice is the reddish-brown star-shaped dried fruit of the Chinese evergreen Illicium verum tree, native to southeastern China and Vietnam. It’s not related to anise, but they share similar aromatic compounds such as anethole. Star anise adds its sweet flavor to Vietnamese pho and Chinese five-spice powder.

Sumac is a bright red spice that comes from the dried and ground berries of sumac flower, which is related to mango and cashew plants. It’s popular in North African and Middle Eastern cooking, where it’s sprinkled on hummus and used to flavor meat. Sumac has a citrusy, tangy flavor due to malic and other acids. It also has woody, pine notes that balance out the spiciness.

This spice comes from the rhizome (underground stem) of Curcuma longa and is a member of the ginger family. Its bright yellowish-orange color makes it an important dye, and its sharp, earthy flavor is reminiscent of mustard and pepper.

Turmeric is a key ingredient in Moroccan tagines and Indian dal. It also has numerous health benefits and may help reduce inflammation.

Is there a difference between cooking with ground vs. whole spices?

Cooking professionals always recommend buying whole spices and grinding them at home. That’s because whole spices retain aromatic compounds much better than ground spices. But most of us rely on ground spices for added convenience. Having a mix of whole and ground spices in your cabinet is a great habit that’ll improve your cooking skills.

Use whole spices for adding intense flavor to braises, creams, stews, teas, and other infusions. You can also mellow the flavor of whole spices like cumin and mustard seed by toasting them until they pop. Use ground spices whenever you want to disperse a lot of flavors: such as in spice rubs and baked goods. Try deep-frying a mix of different ground spices in ghee or oil `to blend the flavors.

What are the best ways to store whole and ground spices?

Store spices you often use in glass jars or tins in a dark cupboard. And store spices you don’t frequently use in airtight containers in the freezer. Label spices with the purchase date, and give them a sniff every other month to make sure they’re still pungent.

Ground spices oxidize more quickly than whole spices due to larger exposed surface area and will lose flavor within a few months, while whole spices can easily last up to a year.